According to Wikipedia, Luis Gerardo Méndez is masculine and has been dating Pablo Chemor, a music composer since January 2016. 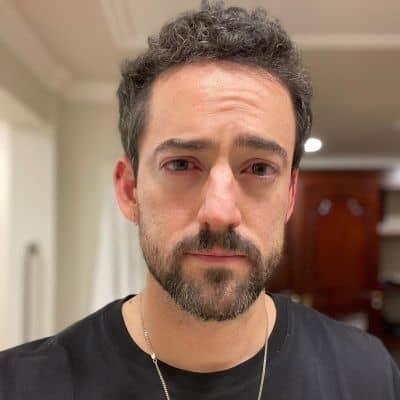 Who is Luis Gerardo Méndez?

Luis Gerardo Hernández Méndez is a popular actor and producer who hails from Mexica. She is best known for her appearance in the Netflix original Club de Cuervos and Nostros los Nobles.

Recently, in 2022, he appeared in the tv series, The Resort and the comedy film, Me Time.

The popular actor was born on  12 March 1982 in Mexico. As of 2022, he is 40 years old holding Mexican nationality. His ethnicity is Caucasian and his birth star sign is Pisces according to astrologers.

He was born to his late father, Dr. Luis Gerardo Hernández Ayala, who used to work at the medical faculty of the University of Cuauhtémoc in Aguascalientes.

The reason behind his death is still unknown. Also, the name of his mother, siblings, and further educational life has not been disclosed yet.

In 2003, Luis debuted his acting career by appearing as Raúl in the TV series, Ladrón de corazones. Then, he played the role of Bataca in the melodrama telenovela, Lola, érase una vez in 2007.

He has also been active in the movies as well. In 2004, he portrayed the role of Mao in Santos peregrinos. He appeared as Joaquín in the Mexican drama film, La Niña en la Piedra (Nadie Te Ve) in 2006, which was directed by Maryse Sistah.

Following that, he was cast in Gary Alazraki’s 2013  Mexican dark comedy film, Nosotros Los Nobles, also called The Noble Family and We Are the Nobles.

In 2021, he was cast as Victor Tapia in the American crime drama, ‘Narcos: Mexico.’  Most recently in 2022, he starred as Baltasar Frías in the comedy mystery series, The Resort’ which aired on Peacock on July 28, 2022.

Besides being an actor, he is the owner of a production company, Cine Vaquero.

According to various sources including Forbes, Luis’s net worth is estimated to be between 1 to 5 million USD. However, his salary and incomes are still under review.

People seem to be always curious to know about the rumors and controversies related to celebrities.

Fortunately, Luis Gerardo Méndez has maintained a clean profile by maintaining a balance between professional and personal life.

The handsome actor stands at the height of 5 feet 9 inches weighing around 72 Kg. Luis’s body measurements like chest, waist and hip size are not available.

Moreover, his physical features include dark brown hair and eyes.

Talking about his social media appearance, he is present on Instagram under the username, @luisgerardom having more than 2.5 million followers.

Likewise, there is a fan-created Tiktok account by his name which has about 37.2K followers.