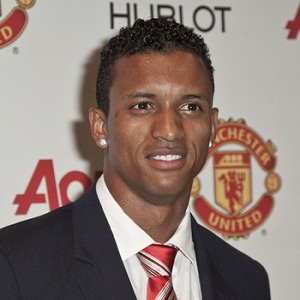 Talking about Luis Nani’s relationship status, he is married to Daniela Martins.

They exchanged rings in 2013 and gave birth to their son Lucas da Cunha in Dec 2013.

Previously, this player had affairs with the British p*rnstar Gemma Storey and Tyese Cunningham.

Who is Luis Nani?

Luis Nani is a Portuguese professional footballer. He plays as a winger for the Portugal national team and an American club Orlando City.

His father, Domingos Antonio Cunha David, and mother, Maria do Ceu Almeida left him when he was 5 and 12 years old respectively.

From his mother, he has eight siblings and from his father’s side, he has five siblings.

His raising was done by his aunt Antónia. He holds an ethnicity of Cape Verdean. His education details are not disclosed.

Luis Nani joined Sporting CP in 2005 and played there for two years. Nani was sold to Manchester United for $28 million in 2007. He had 147 appearances and 25 goals for the club. And then he went back to Sporting CP on loan for a season.

Talking about the rumors and controversy of this talented footballer, there are no desperate rumors regarding his personal and professional life.

This talented player has an estimated net worth of $30 million. He receives a salary of $6.24 million.

He used to own a house which was sold in £3 million. He has several luxurious cars like Chey Camaro, Chevrolet, Bentley, Lamborghini, and more.

The average salary which a football player earns is around $2.1 million per year.

Regarding Luis Nani’s body features, he has black eyes and black hair.