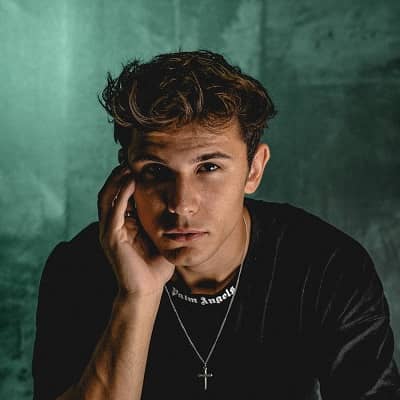 He is not much interested to be in a relationship. He is possibly single for now. Currently, he is serious about his career and working hard on it. He is concerned about his future.

If he has any girl that he loves, he hasn’t opened up about it yet. Moreover, his hobby is playing soccer and using social media. His favorite athlete is Cristiano Ronaldo.

Who is Luis Ortner?

Luis Ortner is a German YouTuber, Tiktok star as well as football player. He is an accomplished Youtuber with over 367k subscribers. He is also a Tiktok Star with over 3.2M followers.

Furthermore, he is popular as a look-alike of singer and songwriter Shawn Mendes.

Luis is he son of Siegwart Ortner and Dagmar Ortner. His father is Italian and his mother is German. He grew up in Berlin, Germany for 19 years and later moved to the United States for his college education. Ortner also has a sibling named Pia.

He holds German nationality. He is originally from Germany but moved to the USA. Similarly, his birth sign is Gemini. He is of Italian and German ancestry.

Furthermore, he moved to the USA for his college education. Therefore, he must be a student at a University in the USA and he also plays soccer for college. He played soccer for FC Energie Cottbus during high school and majored in Business at Longwood University.

Luis Ortner usually uploads comedy, trend, and fashion videos on his Tiktok account. He gained extra followers for being a lookalike of singer and songwriter Shawn Mendes. He started posting to TikTok on December 27, 2020.

Currently, his luisortner_ account has gained 3.2 million followers and 65.4 million likes altogether. He also has a self-titled youtube channel which was opened on October 18, 2021. He often posts shorts on his YouTube channel and he has over 367k subscribers.

Talking about his football career, he represented FC Energie Cottbus at both the U17 and U19 levels in Berlin, Germany. Luis scored three goals in 10 games for the U17 squad in 2018-19. He scored seven goals in three seasons even though it was affected by the pandemic. Likewise, he scored one goal over two games in the 2020-21 season and had three goals in 15 games in the 2019-20 season.

Speaking on his income, he makes a decent sum of money through his successful youtube career and social media presence. He has an estimated net worth of around $1M.

Luis has never been exposed to any rumors or controversies till now. However, people often mistake him for singer and songwriter Shawn Mendes.

Ortner is a handsome guy who looks just like Shawn Mendes. He has a decent height of 5 feet 1o inches and weighs moderate. similarly, his eyes are of dark brown color, and his hair is brown.

Being a social media personality, he is quite popular on media platforms. He has around 3.2M followers and 65.4M likes on Tiktok. Likewise, he also has an Instagram account with around 62.1k followers.

Moreover, he owns a youtube channel with over 367k subscribers.