Talking about her love life, Luisa D’Oliveira is in a relationship with Jez Bonham. Jez is a musical artist by profession. Luisa has posted some photos of their happy moment on her Instagram.

The couple has maintained their relationship profile very low. On the other than, D’Oliveira has not shared any details of her relationship details in the public till now. 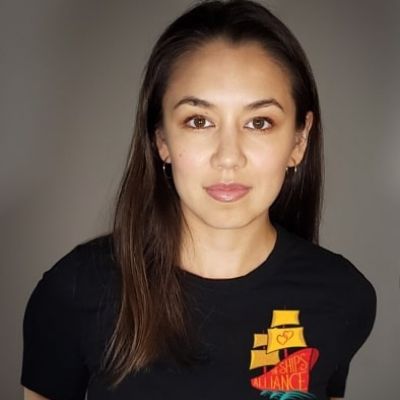 Who is Luisa D’Oliveira?

Luisa D’Oliveira is a well-recognized Canadian actress and television personality. D’Oliveira is widely famed for her role in Agabelle Loogenburgen 50/50(2011), Aphrodite Girl in Percy Jackson & the Olympians: The Lightning Thief(2010), and Detective Poppy Wisnefski in Cracked(2013).

Moreover, she is also named for her role as Emori in The CW’s The 100.

Luisa D’Oliveira was born on 6 October 1986. At present, her age is 34 years old. Likewise, her birthplace is Vancouver, British Columbia, Canada.

Not much is known about her father and mother’s details Luisa has been secretive about her parent’s details. Moreover, she has a brother name, Nate d’Oliveira.

Talking about her nationality, D’Oliveira holds a Canadian identity whereas her ethnicity is Caucasian-Luso-Indian, Portuguese, French, Scottish, and Irish descent.

Regarding education, the actress attended Capilano University for full studying science and then switched to arts for her second year.

Professionally, Luisa started her professional acting debut in 2007’s short film, The Vent portraying the role of Elizabeth. In the next year, the actress was cast in an episode of the American fantasy horror television series, Supernatural as Jenny.

Likewise, in the year 2009, Luisa was featured in six TV series, Psych as Sissy, Storm Seekers as Paloma, Stranger with My Face as Nat Colson, The Good Wife as Sanda Pai, Ice Twisters as Ashle, Hellcats as Meredith.

D’Oliveira also performed in the 2010 fantasy film, Percy Jackson & the Olympians: The Lightning Thief portraying the role of Aphrodite Girl. After starring as a supporting character in many movies and TV series, the star performed her first lead role as Detective Poppu in Wisnefski in 2013.

She won a nomination for the 2014 UBCP Award for Best Actress. Additionally,  she featured as the main character Amy Welch in the American horror anthology television series, Channel Zero. Some of her movies are 50/50(2011), The Package(2012), What Doesn’t Kill You(2014), and Into the Grizzly Maze(2015).

A talented Canadian actress, Luisa has earned a handsome amount of money from her profession. She has been active in her profession from the year 2007 till the present.

It is reported that Luisa D’Oliveira has an estimated net worth of $8 million as of 2022.

Luisa has never been part of any controversial matter or rumors till now. The star has been preoccupied with her professional and private life.

It seems that D’Oliveira prefers enjoying her personal life and does not want to merge it with her professional life.

34 years old star, Luisa has gorgeous looks and an admirable personality. She stands at a height of 5 feet 5 inches. Also, she has a balanced bodyweight of 57 kg.

Furthermore, Oliveira has brown eyes whereas her hair is dark brown.

Regarding her social media presence, Luisa D’Oliveira is an active personality on social media. Luisa has more than 474k followers on her official Instagram account @luisaoliveira.

She is also active on Twitter with around 65.4k followers.

Moreover, Oliveira is also available on Facebook with nearly 4.2k fans and supporters.