Luka Sabbat is a model, actor, stylist, fashion designer. He is currently single.

Luka Sabbat is currently living his single life. Previously, he was in a relationship with Adriana Mora. They started dating his fellow model in 2016 but later broke up. After that, he had a brief romance with Younes Bendjima, ending their relationship in August.

Moreover, in mid-October 2018, Luka Sabbat was seen on a “double date” with girlfriend Kourtney Kardashian, Kendall Jenner and her rumored boyfriend Anwar Hadid.

Also, he had been romantically linked to an Australian woman named Dani Stani in 2014 and later with model Kaia Gerber, daughter of Cindy Crawford and Rande Gerber. 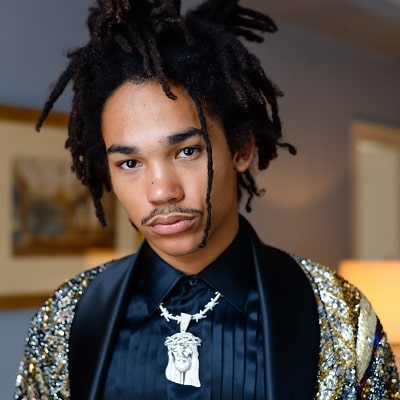 Who is Luka Sabbat?

He was born on November 26, 1997, in New York, USA. He was born to mother Jessica Romer and father Clark Sabbat. His mother H His mother is a former stylist for John Galliano and Dior – now a chef and his father is a fashion designer. Sabbat has a younger brother and he grew up along with him in New York City and Paris.

Lika holds American citizenship but his ethnicity is mixed(Irish, English, German and Haitian).

He attended Lower Manhattan Arts Academy and graduated from high school in 2015  and went off to study at college. However, he dropped out after less than a semester.

Initially, he had not thought of pursuing a career in modeling. Later, he revealed in a 2015 interview with Complex, that his modeling career started off as an “accident.” He added that he was approached by a manager while shopping for video games with his father.

He was impressed with travel and money earned by models. Likewise,  he was signed with Request Model Management and just after a week, landed his first campaign.

Later, he made his appearances in commercials for American Eagle and Calvin Klein. Moreover, he walked his first show, for Kanye West’s debut collection with Adidas Originals in 2015.

After that, he has worked with artist Noah Dillon for Hot Mess, Hugo Boss, Vogue,  Dolce & Gabbana, Tommy Hilfiger and has been featured on Vogue, Complex, and Refinery29.

He alongside his father created Sabbat X RLTD clothing line for the benefit of charity Help Haiti. Haiti is his father’s mother country.

He was nominated for Teen Choice Award in the category Choice Summer TV Star: Male for ‘Grown-ish’ in 2018 and in 2019.

He has an estimated net worth of around $4 million as of 2022, and he has earned that sum of money from his professional career.

He was rumored to be in a relationship with Kourtney Kardashian in late 2018, which they denied in early 2019.

He has a height of 5 ft. 11 inches and weighs average. Also, Luka has dark brown eyes and black hair.