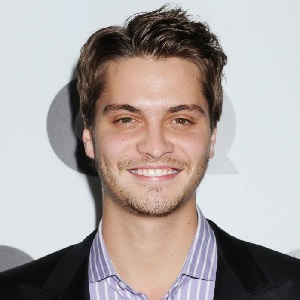 Anything that I do is something that I'm passionate about and really believe in, no matter how it turns out

I'm so southern Ohio. And Cleveland is a different world, you know?

Not to sound cliché or anything, but with the downtime that I have and the possible platform that my work could give me, I'd like to figure out a way to give back and make a difference, you know?

Luke Grimes is an unmarried man until now. He is currently in a relationship with Gillian Zinser. The couple has been in a long-term relationship since 2011. Like began dating Gillian back in November 2011.

The couple has been together for over five years now and their relationship is going very well. He hasn’t revealed any plans of settling down at the present time.

Luke and Gillian are very happy about their relationship and they are living a happy life together.

Who is Luke Grimes?

Luke Grimes is an American actor. He is best known for his role as Marc Lee in the film American Sniper (2014) and as Elliott Grey in the Fifty Shades of Grey film series.

He is also famous for playing the character Ryan Lafferty in the TV series Brothers & Sisters from 2009 to 2010.

Luke was born on 21 January 1984, in Dayton, Ohio, USA. His full name is Luke Timothy Grimes. He is the youngest of four children of Angie Barker and Rev. Randy Grimes.

His nationality is American and he is of English, Scots-Irish, German, Scottish, Welsh, and Swiss-German ethnicity.

Grimes graduated from Dayton Christian High School in 2002. After that, he moved to New York City and studied acting at the American Academy of Dramatic Arts.

Luke Grimes began his acting career in 2006. His first acting role was as Jake in the film All the Boys Love Mandy Lane (2006). After that, he appeared in several films including War Eagle, Arkansas, and Assassination of a High School President.

He became popular when he played the character, Ryan Lafferty, in the TV series Brothers & Sisters (2009-2010).

He played the same character in the upcoming film Fifty Shades Freed (2018). Luke has a net worth of 500,000 dollars but his salary is unknown.

Luke Grimes has a height of 6 feet and has a decent weight. He has brown hair color and his eye color is brown.

Dating since 2011 and are still together, Gillian Amalia Zinser an American actress known for her appearances as Ivy Sullivan in 90210 is happily living with Luke Grimes!