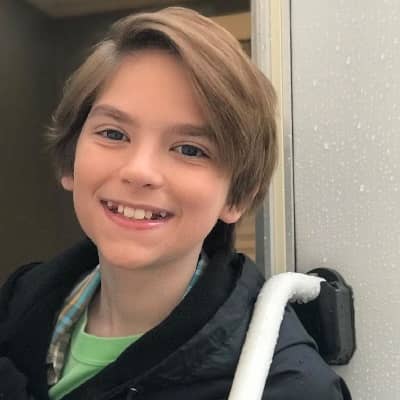 Luke Judy is too young to be in a romantic relationship. As of now, he appears to be Single.

Presently, he is more focused on his studies and career rather than on any love affairs. In further days, if he introduces anyone as his girlfriend or lover then we will update it.

Who is Luke Judy?

Luke Judy is an American child actor. He rose to fame after appearing in the role of Ricky McClane in the 2014 series, ‘Llama Cop’.

His latest film is ‘A Soldier’s Revenge’ where he portrayed the role of Ethan.

The actor was born on March 21, 2007, in Daytona Beach, Florida, USA. He holds an American nationality unfortunately his ethnicity is unknown.

The name of his parents is Chris Judy and Jennifer Judy. His parents run a hair salon named Beautiful Hair Color Studio.

Also, he has an older sister named Savannah Judy. She is also a child actress and singer. Furthermore, Luke hasn’t mentioned his academic details but he might be attending high school.

Luke began his acting career at the age of four in Orlando, Florida and he later moved to Los Angeles in 2013 along with his family. He made his first acting credit in a TLC Presents television series in 2013.

Since then he has appeared on several TV shows like in the year 2014 he appeared in Mighty Med where he portrayed the role of Young Oliver. Similarly, he was cast as the younger version of Paul Wesley’s character Stefan in an episode of the hit CW series, ‘The Vampire Diaries’.

In 2016, he made his silver screen debut through the drama, Guys Reading Poems along with Patricia Velasquez, Alexander Dreymon, Lydia Hearst, and other casts. Furthermore, he was cast in a lead character as Tyler in the film, ‘A Woman Deceived’.

Some of his credit film are enlisted below,

In October 2020, Luke won the Best Young Actor award in The Wild Bunch Film Festival for his work in the film, ‘A Soldier’s Revenge’.

Luke has a fresh career, until now he hasn’t been part of any sorts of disputes and rumors.

Luke’s main source of income is his profession as an actor. He started his acting career at an early age so, it might be estimated, he has around $1 million of net worth.

The net worth is evaluated through other online sources but he personally hasn’t yet shared his exact net worth, salary, and yearly income

The actor is 5 feet 1 inch tall whereas his exact weight and other body measurement are still under review. He has blond hair with attractive blue pair of eyes color.

He is also active on Facebook with more than 2.5k followers and over 2.3k likes.