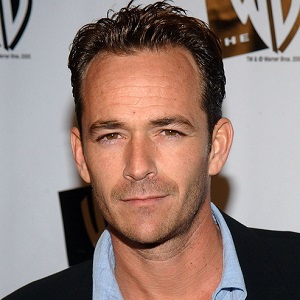 There's a big difference between me and a real, legitimate working hand, or a world-champion rodeo cowboy. I play 'em, and I aspire to be like that, but those guys are tough

The role model thing gets imposed on you by someone else. I don't think that's fair.

Luke has been married in the past. But as of now, he is supposed to be single. Discussing his now-divorced-marriage, he was tied in a marital knot to Rachel Sharp. They got married in 1993. During their time together, they had two children together. Their first child was born on 15th June 1997 named Jack. Similarly, their second child is a daughter named, Sophie born on June 21, 2000. But even after a long time being together, things started falling apart between them. And finally, in 2003, they separated legally.

Before this marriage, he was in a relationship with several other beautiful ladies. He dated Kristy Swanson from 1991 to 1992. Also, he had an affair with the actress, Yasmine Bleeth from 1987 to 1988.

Who was Luke Perry?

Luke Perry was a proficient TV actor. Additionally, he was also a famous film actor. Luke possesses American nationality. Luke was a well-known personality in the TV industry for his acting in American drama series, “Beverly Hills, 90210”. He portrayed the character of Dylan McKay in altogether of 200 episodes.

Luke Perry passed away on 4th March 2019, at the age of 52 in Saint Joseph Medical Center Burbank, Burbank, California, United States. He had a massive stroke a week ago and passed away after a week of the stroke in front of his family and friends.

Luke was born as Coy Luther Perry II. He was born in the Mansfield in the state of Ohio. Although he was born in Mansfield, he grew up in Fredericktown. His father name is Coy Luther Perry Jr. Similarly, his mother name is Ann Bennett. Coy Jr. worked as a steelworker and Ann was simply a homemaker. As he likes to keep his personal life a secret, he hasn’t shared any information about his childhood. Also, there are no details to follow about his early life. His nationality is American and ethnicity is Mixed(English, Scottish, and Irish).

As per his education or academic achievement, he joined Fredericktown High School. Later, he graduated from there. Afterward, he thought of acting which forced him to move to Los Angeles, California.

Luke started his work in the acting field since 1982. After moving to California, he worked at several jobs. As per his acting career, it wasn’t easy. In the initial phase, he worked hard and auditioned for more than 200 times. According to an interview of him with Whoopi Goldberg, he appeared in 215 different auditioned for a role. But unfortunately, he ended up getting a role in a commercial.

Discussing his career on TV, he featured in an episode of TV series, “Voyagers!”. Afterward, he appeared in several other TV projects like “Loving”, and “Another world”. Finally, after his hard work, he got an opportunity to play the main role in a TV series, “Beverly Hills, 90210”. This role made him famous among the public and the media.

What was Luke Perry salary and net worth?

A talented actor like him is paid a pretty good amount of salary. Therefore, as a result, he is able to accumulate a hefty amount of net worth. Currently, his net worth is estimated to be around $10 million.

Luke was rumored to be in the relationship with actress, Renée Zellweger back in 2007. As of now, he is far away from any rumors or controversy.

Luke has a charismatic personality. He has an average height of 5 feet 10 inches and weighs 78 kg. His hair color is dark brown and eye color is brown.