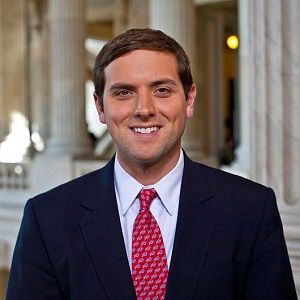 The 32-year-old American journalist, Luke is an unmarried man. Furthermore, she has never seen with any woman to date. It seems he is totally focused on his work rather than stuck in any relationship stuff.

So far, he has managed to keep his personal life so secret that no one is aware of. Besides this, there is not even a single rumor of affair of him. Currently, Luke Russert is enjoying his single life and living elegantly.

Who is Luke Russert?

Luke Russert is an American broadcast news correspondent. Previously, he worked for NBC News in which he hosted NBC Nightly News, TODAY, NBCNews.com, and MSNBC. Furthermore, he has also served as a guest anchor on various MSNBC shows such as Andrea Mitchell Reports and Way Too Early.

Luke Russert was born on August 22, 1985, in Washington, D.C., United States. Talking about his nationality, he is American and his ethnicity is unknown. He is the son of veteran newsman Tim Russert and Maureen Orth.

Concerning his education, he attended St. Albans School in Washington, D.C. in 2004. Later, he completed his graduation in Communications and History from Boston College.

Luke Russert began his career as a co-host of the sports talk program named 60/20 Sports on XM Satellite Radio at Boston College. After the death of his father, NBC News hired Russert as a correspondent covering youth issues as part of its coverage of the 2008 presidential election. Back in 2009, he began working for NBC News on Capitol Hill as a Congressional correspondent in which he covered the House of Representatives.

Additionally, he has also covered the 2011 Hurricane Irene for NBC News. During his time at NBC, the veteran American journalist hosted NBC Nightly News, TODAY, NBCNews.com, and MSNBC. Furthermore, he has also served as a guest anchor on various MSNBC shows such as Andrea Mitchell Reports and Way Too Early.

Being a famous journalist, he earns a decent amount of money from his profession. However, his salary and net worth are unknown.

As of now, Luke has not won any awards in his career to date. Although, he got nominations for two Emmy Awards for Best Report in a News Magazine and Outstanding Live Coverage of a Current News Story – Long Form.