Luke Zimmerman as per the reports is currently in a romantic relationship. Though his girlfriend’s details are not disclosed, they every week go for ballroom dancing.

Besides this, he is also a kind-hearted person. He went with a girl to her senior prom and there she was selected as prom queen. Actually, Luke was contacted by an organization named Make A Wish Foundation to escort that girl.

She is suffering from down syndrome and other health conditions. 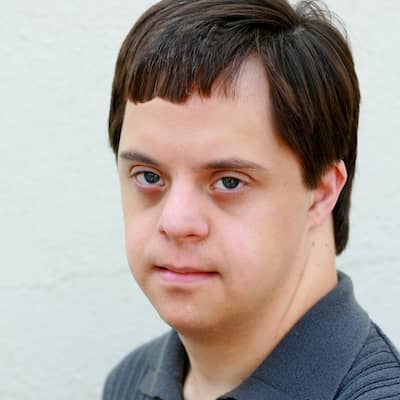 Who is Luke Zimmerman?

Luke Zimmerman is an American actor. He is a role model for specially-abled people.

In addition, recently in 2020, he was seen as a Supermarket Employee in Raw (Short Video). For his accomplishments, he was awarded Quincy Jones Exceptional Advocacy Award in 2012.

Does Luke Zimmerman have down syndrome?

Luke Zimmerman was born with Down syndrome. Despite being differently-abled, he has followed his dreams.

He was born on 11 Sep 1980 in Evanston, Illinois, United States. The name of his father and his mother is unknown to the public.

His parents lived in many places and in 1986 they settled in Beverly Hills, California. He was interested in playing football when he was young.

Luke’s ancestry is Caucasian and has an older plus a younger brother. About his academics, the details are unknown, But he has attended Performing Arts Studio West.

Luke Zimmerman started acting in a TV movie named Daughter of the Streets. It was released in 1990 and he played the character of Andrew. After this, he was seen in other projects such as Faculty and Finn.

Then from 2008 till 2013, he was Tom Bowman in the TV series The Secret Life of the American Teenager. His character received much love and appreciation from the public and it increases his popularity.

Luke’s other acting credits are,

At present, this actor has accumulated an estimated net worth of around $50 thousand. His salary from his career is not yet disclosed.

Luke is keeping himself away from rumors plus scandals at present.

Regarding Luke Zimmerman’s body features, his height and his body weight are average. He has dark brown eyes and dark brown hair with a medium skin complexion.