Singer Lunay is low-key about his love affair. 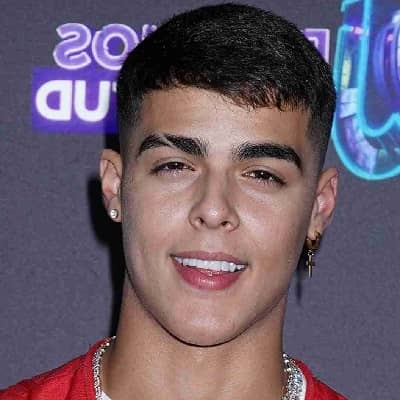 What is the relationship of Lunay?

Lunay hasn’t yet talked about anything regarding his relationship. He is also never seen dating anyone publicly.

And so he may be single right now.

Luna is one of the popular Puerto Rican singers.

He is best known for the release of various tracks such as A Solas, Luz Apaga, Soltera, and Soltera (Remix) as well as for his debut album Épico.

The singer was born on October 4, 2000, in Corozal, Puerto Rico. His birth name is Jefnier Osorio Moreno. He holds Puerto Rican nationality and is of Hispanic race.

Luna was raised by his parents Máximo and Jennifer. He has an older brother named Jeimax and two younger half-sisters named Jeimaris Nicole and Kate from his father’s side.

He attended a local high school. Details regarding his degree are not disclosed to the public.

Luna used to record his various freestyle raps and upload them to Facebook when he was just 12 yrs old. And his freestyle raps caught the attention of producers like Chris Jeday and Gaby Music.

Likely, at first, he uploaded his small musical projects to SoundCloud under the name of “Jennifer and later inserted into the music industry.

And he launched Aparentas from which Lunay gained his popularity. Then his talent was recognized by the producers in Puerto Rico: Chris Jeday and Gaby Music in the year 2017.

They signed a contract with the young Puerto Rican and offered him a record deal. And after that, he changed his name to Lunay in May 2018.

Likely the same month, he released the song “Si Te Vas Conmigo” and “Dejame Saber” a month later. A Solas was also released the same year which features Lyanno and “Como La Primera Vez” with Amarion.

His first collaborations were with Ozuna, Rauw Alejandro, and Lyanno. It was entitled Luz Apaga and has more than 132M views on YouTube.

In 2018, the remix of “A Solas” was released with Anuel AA, Brytiago, and Alex Rose. Luna released his single “Soltera”, in March 2019. It achieved more than five million views in just five days on YouTube.

In addition, he collaborated with American rapper Lil Mosey on the single “Top Gone” recently on 5 August 2020.

The single also appeared on the deluxe edition of the latter’s second studio album “Certified Hitmaker”.

His net worth is around $1.5 Million. His songs are always trending on youtube and he amassed a good amount from it too.

Luna has also done endorsement work for various brands such as Apple Music. He also earns from his merchandise website. He also has another online merch website in redbubble.com.

To date, the star has kept outside from being in any sort of rumors and controversies.

Likely, his official TikTok account also holds 2.5M followers with around 9M likes. Similarly, he joined YouTube on Apr 6, 2018, and has 4.45M subscribers up to now.

You may also read the bio of Mechiesocrazy, Taylor Swift, Justin Beiber, and Haley Sullivan.