Lupita Nyong'o is an Academy Award-winning American actress. She calls herself Mexican-African. Lupita has not revealed her romantic life or love interest. 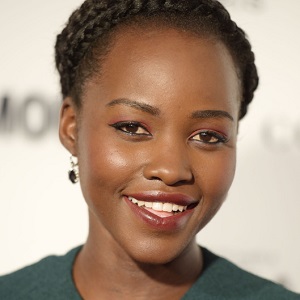 They were haunting. I could only sleep on my belly. I was just so aware of them the whole night. I remember fretting and weeping, and then it occurred to me that my discomfort was temporary, and the woman who I was playing, her discomfort was permanent. It just really centred me, and really quieted my soul for the next day's work

I was heartbroken by her story. I just felt so sorry for her. I recognized then that I had a lot of work to do to get to a point where I could play her because feeling that kind of sympathy for someone is no way to actually inhabit them.. She was just simple and she was trying to get by on a daily basis. She's not sentimental about her pain. I had to have the same kind of attitude

When I look down at this golden statue, may it remind every child that no matter where you are from, your dreams are valid?

The prominent actress Lupita Nyong’o has kept her personal life a secret and as well as away from social media.

Excluding these relationships didn’t last long and they separated.

Besides this, she hasn’t publicized any information about it as she only wants to focus on her career rather than giving time to her personal affairs.

Who is Lupita Nyong’o?

Lupita Nyong’o is a Kenyan-Mexican international filmmaker and actress.

Her birth name is Lupita Amondi Nyong’o. She is the daughter of Kenyan politician Peter Anyang’ Nyong’o.

She is the first Kenyan-Mexican actress to win the Oscars for her movie, 12 Years a Slave. Her latest movie is a Marvel movie, titled Black Panthers which was a big hit.

Additionally, she is candid about preventing sexual harassment and working for animal rights.

Lupita Nyong’o was born on 1st March 1983 in Mexico City, Mexico to a middle-class family. She belongs to the nationality of both Kenya and Mexican.

Her parents moved to Kenya when she was an infant and was raised in the suburb of Nairobi. When she was young, her parents bought a cassette tape which changed her life.

Her aunt in Nairobi was also a theater actress.

She is the daughter of Kenyan politician Peter Anyang’ Nyong’o(father) and mother Dorothy Nyong’o. She has five siblings.

The names of her two siblings are Peter Nyong’o, brother as well as Esperanza Nyong’o, sister.

Her cousins and siblings used to perform short skits during family functions.

Lupita completed her high school at Rusinga International school in Kenya. Then she joined  St. Mary’s School in Nairobi, where she had sustained an IB Diploma in 2001.

After graduation with her IB diploma, she then pursued a degree in film and theatre studies from Hampshire College.

Similarly, she has also qualified for a master’s degree program in acting at the Yale School of Drama.

Moving towards the professional life of the prominent actress Lupita, started her career in 2005.

From this year she produced several films, including The Constant Gardener in 2005, Mira Nair’s The Namesake in 2006, and Salvatore Stabile’s Where God Left His Shoes in 2007.

Subsequently, she starred in the short film “East River”, directed by Marc Grey as well as a shot in Brooklyn in 2008.

The next year, she wrote, directed, as well as produced the documentary In My Genes, about the discriminatory treatment of Kenya’s albino population.

Through her various action movies, she also got the opportunity to play in the action-thriller Non-Stop in 2014, Nyong’o co-starred in Star Wars: The Force Awakens as force-sensitive space pirate Maz Kanata and a CGI character created using motion capture technology in 2015.

Likewise, she returned to the stage with a starring role as an unnamed girl in the play Eclipsed, written by Danai Gurira in 2015.

This year, she earned a Theatre World Award for Outstanding Broadway. The next year, she co-starred in Jon Favreau’s The Jungle Book, a live-action/animated movie, voicing Raksha.

Similarly, she has also played in Star Wars: The Last Jedi in 2017, Black Panther as well as Little Monsters in 2018.

Nyong was recognized by Forbes in 2020 as one of the 50 Most Powerful Women in Africa.

Lupita declared in February 2021 that she would create an animated musical for Netflix based on her 2019best selling children’s book, Sulwe.

Through her hard work in her professional life, she has earned a net worth of $10 million as of 2022.

The flirty interactions have sparked rumors which may be something more between Lupita and her Black Panther co-star Michael B Jordan.

Moving towards his body measurements, she has a height of 5 feet 4 inches and weighs 51kg.

Besides this, she has black hair color and dark brown eye color. Her body measurement measures 34-24-36 inches.

You may like to read Mobolaji Dawodu, Jared Leto, Noelle Sheldon