Lyn May is a vedette, exotic dancer, and actress. 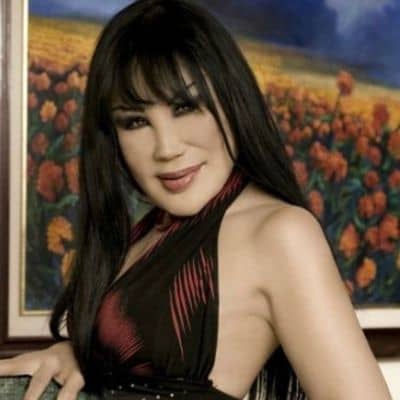 Quick Facts of Lyn May

Relationship Facts of Lyn May

As per different sources, the media mentioned that Lyn May got pregnant at 68 years old in August 2021. Her partner is merely 29-year-old fiancee Marcos D1. The star announced the message of her pregnancy on Instagram and later it created a huge controversy.

Earlier, she married businessman Antonio Chi Su. The former couple also started a Chinese restaurant on Avenida Bucareli in Mexico City. Her ex-husband, Chi Su was diagnosed with prostate cancer in 2004 and passed away in 2008.

Previously, May met her first husband, a Mexican sailor. They had two daughters after five years of marriage. Sadly, actress May separated from her husband claiming physical violence and sexual abuse.

Who is Lyn May?

Lyn May is a well-recognized Mexican vedette, exotic dancer, and actress. May is widely famed as the most popular Mexican vedette during the 1970s and 1980s, a popular sex symbol, and one of the lead stars of Fichera’s cinema.

Lyn May was born on 12 December 1952. At present, her age is 68 years old. Likewise, her birthplace is Acapulco, Guerrero, Mexico.

Not much known about her father and mother’s details, May has been secretive towards her family details. Moreover, she has not mentioned her sibling’s details in the public till now. She helped with household expenses by selling souvenirs to tourists in her childhood.

Talking about her nationality, May holds a Mexican identity whereas her ethnicity is mixed.

Regarding education, the vedette has never mentioned her academic qualification to the public. She might have completed her graduation from the renowned university of the town.

Initially, May began her career in the cabaret, El Zorro as a dancer. She also worked at the Tropicana cabaret in Acapulco. Then, she alternated with the popular Mexican comedian German Valdes, Tin Tan. Post her great successful season with Tin Tan, May moved to Mexico City.

She then joined with television presenter Raul Velasco and started working as a dancer in the program, Siempre en Domingo. Moreover, in 1970, Lyn was hired by the business Enrique Lombardini. He was the manager of the Teatro Esperanza Iris.

Additionally, the famed vedette also performed her first nude causing a furor among the male audience. She also engaged in Mexican Cinema especially the genre known as Fichera’s film of the 1970s and 1980s. Later, she retired from the stage after declining the genre.

Presently, the famous vedette works as a Tahitian dance instructor at the Plaza Caribe Hotel in Cancun, Mexico, and performs on weekends in the bar of the same establishment. The star has also performed in the documentary film, Beauties of the Night.

Lyn May- Net worth, Salary

A famous Mexican vedette, May has earned a handsome amount of money from her profession. She has been active in her profession from the year 1970 till the present.

It is reported that Lyn May has an estimated net worth of $1-$5 million.

However, the famed actress has not disclosed her exact salary, earnings, and assets details till now.

As per different sources, the Mexican star, May’s face has been significantly changed over time. she received shots of what she later learned was baby oil from a woman who claimed it keeps her young forever.

She did not experience any side effects in short term but the procedure eventually resulted in a serious abscess in her face. Lyn had to go through multiple surgeries to remove the foreign material. Moreover, the star also observed as a result of the physical pain and what she felt were uncontrolled tabloids on her condition.

The popular vedette, Lyn has been part of any controversial matter. She openly stated she had an affair with a former President of Mexico. However, the actress did not disclose his identity. As per different sources, it is rumored to be Jose Lopez Portillo.

The former President had affair with Sasha Montenegro and later they married as well.

Other than that the star personality has never been in any sort of controversial matter.

68 years old vedette, May has beautiful looks and an admirable personality. She has not revealed her exact height but seems to be more than 5 feet.

Furthermore, Lyn has brown eyes whereas her hair is blonde.

Regarding her social media presence, Lyn May is an active personality on social media. Lyn has more than 250k followers on her official Instagram account @lyn_may_.

She is also active on Twitter with around 21.3k followers. However, May is not available on Facebook at the moment.

Jason Tartick talks of the mayhem during the initial days of his quarantine with girlfriend Kaitlyn Bristowe!

Lavish 21st Birthday Bash Of Brooklyn Beckham And Some Of The Pictures From The Party You May Not Want To Miss!