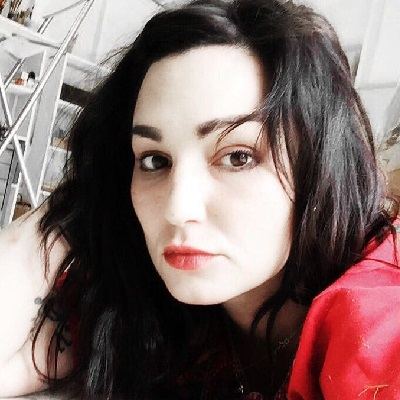 Lyn Z is happily married to the Rock singer, Gerard Way. Her husband, Way is renowned as the lead singer and the founding member of the rock band, My Chemical Romance.

The couple exchanged vows on the 3rd of September 2007 during the backstage of the final date of Linkin Park’s Projekt Revolution tour. The wedding was performed by a member of Live Nation’s touring staff who also happened to be ordained, minister.

Together the couple is blessed with a daughter, Bandit Way (b. 27th of May 2009). Currently, she resides in California along with her husband and daughter.

American-British Lyn Z is a bassist and artist. She is renowned as the bassist of the electropunk band, Mindless Self Indulgence (MSI).

Till the date, she has not shared any details on her father, mother, and siblings. She moved to Ledyard, Connecticut at the age of 5 years old. In the city, she completed her Higher studies.

When she was 17, she migrated to New York and joined Pratt Institute. She graduated from the institute with Honors in Fine Art and Illustration.

She started her career as the window display artist. At the time, she used to assist the artist, Ron English. After that, she expanded his career as a music artist with Dolly Parton’s cover band, Beg Yer Parton.

Moving forward, in 2001, she joined the American electropunk band, Mindless Self Indulgence (MSI) as a bassist. She filled the position of bassist left by the former member, Vanessa Y.T. At the time, she could not properly the Bass. As time pass, she started adopting the skill with the time.

In 2002, the band released its 1st live album, Alienating Our Audience under the recording label, Uppity Cracker. Moving forward, she became the part of the band’s EPs 2003- Despierta Los Niños, 2006- Another Mindless Rip Off, and 2010- <3.

Besides that, she has released the albums including You’ll Rebel to Anything, If, and How I Learned to Stop Giving a Shit, and Love Mindless Self Indulgence along with the band.

Career as an Artist

Apart from being a musician, Lyn Z is also a talented artist. On the 13th of November 2010, she launched her collective artwork, HUSH at the Dark Dark Science Gallery. The exhibition was named Smile Even If It Hurts.

Later, on the 11th of December 2010, she launched sone artwork on her official website. Also, she contributed her work at the Art Exhibition that took place on the occasion of the 15th anniversary of South Park at the Opera Gallery in New York.

As of 2020, she has an estimated net worth of $500 Thousand. As a bassist, her earnings are in the range of $22k to $208k. Besides that, she also makes through her musical tours and

Talking about net worth, her husband, Gerard Way has an estimated net worth of $20 million. His net worth is attributed to his career as a music artist.

She has brown eyes with brunette hair. She stands at a height of 5 feet 7 inches and has a decent weight.

Till the date, she has not been part of any kind of controversy and scandals that created a buzz in the media. Also, she has successfully maintained a distance from any sort of rumors.

You may also read the bio of Toni Pirosa, Emmanuel Kelly, and Matt Maeson.