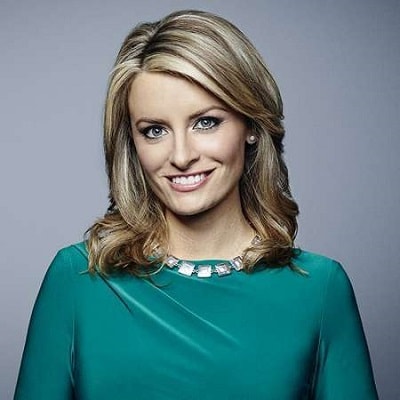 Lynda Kinkade is a married woman who has been married to her longtime boyfriend Travis Jackson since 13 April 2013. The couple is blessed with two children: daughter Georgia Emily Jackson, in August 2016 and second daughter, Isabella Evelyn Jackson in February 2019.

The family is currently living together and there is no sign of divorce between the couple as well.

Who is Lynda Kinkade?

Lynda Kinkade is an Australian journalist and anchor. She is currently working as the anchor for CNN and based at CNN’s World Headquarters in Atlanta, Georgia.

He was born on 10 January 1983 in Sydney, Australia. She was raised by her parents, but she has not disclosed the name of her parents. She has an older brother and her twin brother.

Lynda holds Australian citizenship but her ethnicity is unknown.

She joined the University of Technology, Sydney and graduated with a Bachelor of Arts in Communication (Journalism) with a distinction average.

She started her broadcasting career in 2002 and joined the Seven Network as a political researcher. After that, she worked on the  New South Wales state election in 2003 and soon published her research on each electorate, which was used by anchors, reporters, and producers during the election coverage.

She moved to the country after graduation and worked as a roving reporter for NBN Television in from numerous locations in New South Wales including Newcastle, Tweed Heads, and Lismore.

She moved to New York City in December 2013 as a freelance foreign correspondent where she covered breaking news and filed reports for Seven News, Sunrise (Australian TV program),  and Today Tonight. In addition, she began to work as an anchor for the weekend editions of CNN Newsroom (CNNI) in August 2014.

She was signed in by CNN in January 2015 as its anchor and correspondent. She is currently working as an anchor for the CNN Newsroom’s weekend editions, CNN Today while filling in for The World Right Now and Connect the World.

It seems Lynda has not been awarded and nominated for her work till date.

She has an estimated net worth of around  $1 million and she has earned that sum of money from her professional career.

Lynda was rumored to be the rebound girl of Sam Worthington who is an Australian actor. She was known to be hanging around Worthington in 2011 after he broke up with his girlfriend, Natalie Mark. She was also invited to

Sam’s party and also revealed that she had known the actor previously in 2010 and got lucky to meet each other again after a year in 2011. Later, she stated that they were just good friends, lucky to find each other again.

CNN Anchor And His Rise To Success!! Cyril Vanier’s Wife, Net-worth, And Much More