Who is Jennifer Lopez dating?

Lynda Lopez has previously dated radio/television personality Chris Booker from 2002 to 2008. The couple met in early 2002 at WNEW-FM in New York City but separated in 2008.

Lopez also dated Adam Goldfried from which he has a daughter named Lucie Wren Lopez-Goldfried on August 28, 2008. 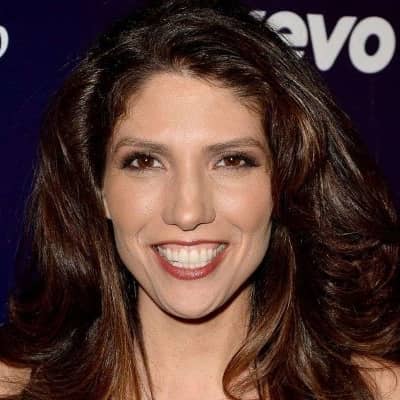 Who is Lynda Lopez?

Lopez is the author of the book AOC: The Fearless Rise and Powerful Resonance of Alexandria Ocasio-Cortez under the publication of St. Martin’s Press.

As a celebrity sister of Jennifer Lopez, her each and every movement is captured by the media, and who knows that even better than the one who is in the media themselves. Currently, her comments on her sister’s engagement with Ben Affleck are getting the limelight in April 2022.

Lynda Lopez was born on June 14, 1971, in the South Bronx under the birth sign Gemini. The 51-year-old journalist has Puerto Rican ethnicity and American nationality.

Introducing her Puerto Rican parents, they are mother Guadalupe Rodríguez, a kindergarten teacher, and father David López, a computer specialist. She grew up in the Castle Hill neighborhood of the Bronx alongside her older sisters, Jennifer Lopez and Leslie Ann Lopez. She is a popular celebrity sister of an American pop star & movie actress.

Regarding education, Lopez graduated from Preston High School in 1989 after completing her primary and secondary education in her hometown. Immediately, she attended the C.W. Post Campus of Long Island University and majored in broadcasting and communications.

Lynda Lopez started working as a VH1 VJ for a short time with Kane and Rebecca Rankin in the late 1990s. Meanwhile, she was also pursuing a broadcasting career at WBAB and WLIR on Long Island before working at WXXP-FM.

Lopez was appointed as the Assistant Program Director and Music Director on WXXP-FM. Further to her days, she featured as a DJ for WKTU in the 10 PM-2 AM timeslot. Within her five years of experience in radio, she became an entertainment correspondent for WPIX’s morning show for the WB11.

In her early career in 1993, Lopez received the title of Who’s Who Among American Hispanics. Similarly, by the year 2001, she successfully bagged an Emmy Award for Outstanding Morning News Program. She has hosted a TV special on her sister J. Lo’s musical career, around which the video Feelin’ So Good was aired on VH1.

Lopez gradually started to enter the glamour genre as well. She became the host of a women’s beauty show Style Network’s GLOW. She worked as an anchor on WNBC-TV, E! News Live, and Spanish-language WNJU.

Talking about her experiences, she worked as a DJ for WNEW-FM, the anchor of WCBS’ weekend morning, and WCBS-TV as a part-time correspondent in October 2003.

Subsequently, Lopez joined the WCBS Radio in Manhattan as a news anchor and contributed till August 2013. After working for her sister Jennifer for a year she again continued the work.

Back on July 29, 2006, she featured as the weekend co-anchor on the News Corp-owned WWOR-TV’s My 9 Weekend News at 10 opposite Mike Gilliam. Afterward, she grabbed the opportunity as an anchor of Fox 5 Live at 11 am and WNYW-TV’s Good Day New York. Lynda has been working as a news broadcaster on WCBS 880 which she quit in 2022.

Lopez has a net worth of around $ 6 Million and makes a good income out of her media career.

However, her annual salary and weekly earnings are not transparent. She definitely lives a luxurious life, consumes high-quality brands, and rides cars.

Lynda Lopez has not entangled himself in controversies and rumors. Basically, she deals with all the matters with her proficiency and even respects the ethical value within.

Lynda Lopez stands at a decent height of 5 feet and 7 inches. She has a weight of around 60 kg, and her bra size is 34 C but her shoe size and dress size are unknown.