Lynn Chen is an American-Taiwanese Actress. She is married.

Lynn Chen is married to Abe Forman-Greenwald. He is an American editor and they exchanged vows in April 2003.

Other information regarding their marriage and relationship is kept low-key. 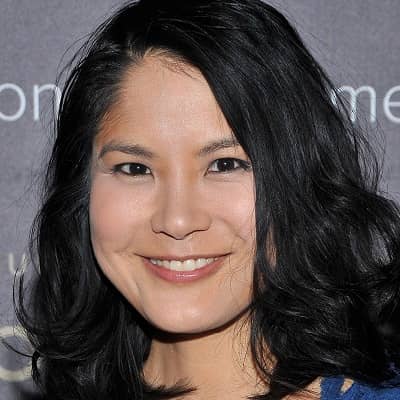 Who is Lynn Chen?

Lynn Chen is an American-Taiwanese Actress. She is best known for her award-winning role-playing as Vivian Shing in the 2004 romantic film Saving Face.

Her other popular roles are in Mentor, Little Manhattan. The actress has also some television credits which include guest spots on the shows like All My Children and Silicon Valley.

Her mother is an opera singer and her father was the founding president of The Kunqu Society, Inc. Chen’s parents migrated to America from Taiwan during the late 1960s.

She has one brother who is also into the music field. Lynn is of American, Taiwanese nationality and belongs to Chinese ethnicity.

Lynn Chen is best known for playing Vivian Shing in the Sony Pictures Classics feature film Saving Face. She also won the Outstanding Newcomer Award at the 2006 Asian Excellence Awards for this role.

Lynn has also made her career through different TV shows. She appeared in the episode “Proof of Concept” of Mike Judge’s HBO show. Likely other shows include,’ All My Children’, ‘Law & Order’, ‘Saturday Night Live’, ‘Law & Order: Trial by Jury’, ‘Numbers’, ‘The Singles Table’.

Lynn has also appeared in the web series entitled Nice Girls Crew. She also appears on an episode of Slanted web series staring as Samantha.

Chen has written and produced a short film entitled Via Text in the year 2011. It was directed by her husband Abe Forman-Greenwald. Also, She writes the popular food blog known as, The Actors Diet.

Being one of the successful actresses in the film industry, she must have a good income. As of 2022, her net worth is said to be between $1 Million – $5 Million.

Furthermore, She has her own YouTube channel with around 16.1K subscribers.

Also, get to know the bio of other celebs like Lil Drip, Aaron Tveit, Kimberley Motley, and Phil Mickelson.