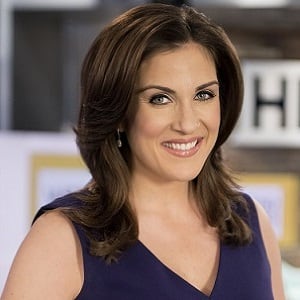 Lynn Smith is a married woman. She is married to Graham Smith. The pair married on 25th April 2015. They have two sons together from this marriage. The marriage is going strong as there is no news regarding any extramarital affairs at present.

Who is Lynn Smith?

Lynn Smith is an American anchor. Currently, she works as anchor/correspondent for HLN. Additionally, in 2013, she also served as the host of the network’s popular news and lifestyle program, ‘Weekend Express.’

Smith was born in the United States as Lynn Marie Smith on June 30, 1979. She is of American nationality. Furthermore, there are no details available about her ethnic background at present.

Talking about her education, Smith attended Miami University in Ohio. There, she majored in Mass Communications.

Smith initially interned with the Academy of Television Arts and Sciences in Los Angeles after her graduation. Additionally, she joined the NBC Page Program in Los Angeles in 2001. She also served as the anchor of NBC-TV’s ‘Early Today’ and MSNBC’s ‘First Look.’ In addition, Smith has also worked as a fill-in anchor at WNBC’s local station ‘News 4 New York.’

Smith currently serves as an anchor/correspondent for HLN. Furthermore, previously, she was also promoted to co-anchor of ‘NBC 10 Weekend Today’ in January 2008.

Smith has not revealed her current salary. However, she has an estimated net worth of around $ 3 million at present.

Smith has not been part of any notable controversies to date. Furthermore, at present, there are no rumors concerning her life and career.