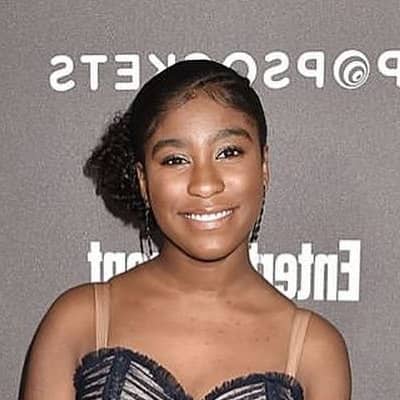 Lyric Ross is possibly single. She is too young to be in a romantic relationship. Currently, she is more focused on her studies and enjoying her teenage life.

Who is Lyric Ross?

Lyric Ross is an American actress and voice artist. She is widely recognized after appearing in the NBC hit drama series This Is Us season 2 where she portrayed the role of Deja. The young actress is managed by Gray Talent Group.

Lyric was born on the 30th of September, 2003, as Lyric Nicole Ross. Her birthplace is Homewood, Illinois, Chicago, USA.

The name of her parents is Steve Ross and Brandi Smith. Talking about her academics history, she attended James Hart.

Lyric began appearing on commercials from the age of five. She made her television debut in the year 2015 through Sirens featuring the role of Lily. The same year she landed another role in an action-drama television series Chicago Fire.

In 2017, she gets attention from the public when she features in the role of Deja. The shows feature other personalities like Sterling K. Brown, Susan Kelechi Watson, Eris Baker, and Faithe Herman. She appeared in a minor role on several TV shows such as Supergirl (2017), Rogers Park (2017), Canal Street (2018), The Boy Behind the Door (2020), Magic Camp (2020), and so on.

Presently, she is portraying the role of the young version of Sterling K. Brown.

Lyric has a clean profile she hasn’t been part of any sorts of rumors and controversy to date.

The young actress has accumulated an impressive amount of wealth through her acting career. However, she hasn’t yet disclosed her net worth, salary, and other income in the media.

The young actress stands at the height of 5 feet 6 inches tall and her weight is about 56 kg. She has dark brown pair of eyes as well as dark brown hair.

Mackenzie Hancsicsak
Tags : "This Is Us" American Actress Voice artist