Maci Bookout is a TV personality, author, and public speaker who has inspired many people.

Talking about her personal life, Maci Bookout was previously in a relationship with Ryan Edwards, with whom she had her first child—a son named Bentley Cadence Edwards.

They have separated in 2009. After the pair split, Maci found love again and is currently married to Taylor McKinney on October 8, 2016, with whom she has a daughter, Jayde, and a son, Maverick.

At the current time, she lived with her family. 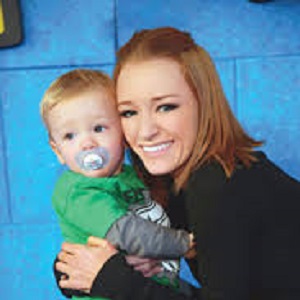 The more you take care of the good things in your life, the longer they stick around and the better they become

The more you take care of the good things in your life, the longer they stick around and the better they become. The more you persevere in the face of doubt and discouragement, the stronger you become. The harder you work for the things you want, the more they mean to you when you find them

The only way to do great work is to love what you do. If you haven’t found it yet, keep looking. Don’t settle.

Who is Maci Bookout?

Maci Bookout is an American reality television personality, author, and public speaker. She is always thriving for more and her dedication has inspired many people working around her.

Maci Bookout was born on August 10, 1991, in Chattanooga, Tennessee, the United States as Maci Deshane Bookout. She is the daughter of Billy and Sharon Bookout.

She additionally has an older brother named Matt. After graduating from Ooltewah High School in 2010, she went to Chattanooga State Community College and graduated with an Associate of Arts degree in Spring 2015.

Maci Bookout turned heads the moment she was the first cast as one of the participants in the infamous reality TV show ‘Teen Mom.’ The show, a spin-off of the previous hit ’16 and Pregnant’ documentary series, revolves around four teens and their initial years into motherhood.

Shooting to fame just after her first few episodes, she had already established herself as a reality star, earning her space in the viewers’ hearts. With her eventful life on full display that involves both the sunny, happy days and the bleak, blue days, ‘Teen Mom’ proved to be a great start in Maci’s career.

With fans flocking in thousands to pick their favorite ‘Teen Mom’ star, her hardcore, no-nonsense attitude throughout the show has helped her strike a chord with the audience too.

Standing by her and offering sympathies during her split-up and joining her in her happiness when finding true love and even announcing pregnancies, Maci’s fans proved to be her rock! And then Maci’s career rose to greater heights of fame because of the undying support she received from her fans.

Her net worth is estimated to be 3$ million but the salary is still unidentified.

Rumors of Maci Bookout’s potential alcohol consumption during pregnancy were first speculated upon when fans noticed that she had a beer in her hand just seven weeks ago on Instagram. Although Maci claims she didn’t find out about her pregnancy until two days after she announced her engagement in January, many of her fans and followers have had a hard time believing that someone.

In addition, Maci was reportedly sporting a slight baby bump at the time.

Several controversies about Teen Mom OG star, Maci, are now surfacing as scenes of her going overboard with a male stripper in Los Angeles bubbled out the surface. Her former beau, Ryan Edwards, is also gaining attention for starring on the MTV show amidst drug abuse allegations.

Early in September, Bookout was seen literally on the floor with a handsome dancer. It was part of the television personality’s surprise Bachelorette celebration planned by her close friends.

Maci Bookout has been standing with a normal height of 5 feet 3 inches (1.6 m) and weighs around 53 kg. She has a light blonde hair color with blue eye color.

Wedding Vibes Is On!! ‘Teen Mom 2’ Star Jenelle Evans Is Shopping For The Wedding Dress For Her Big Day With Her Fiancee David Eason; Says ‘It’s Finally Happening!’