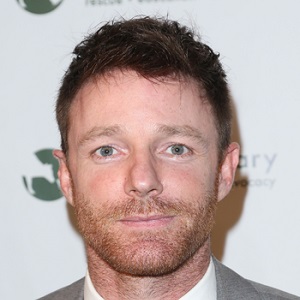 “I technically have two last names, which is a lot of fun when you're making airline reservations.”

Mackenzie Astin is a married person. He has been married to Jennifer Bautz since April 11, 2011. The couple has not welcomed any child yet and the couple is spending their quality time with each other.

Also, there is no sign of divorce between them.

Who is Mackenzie Astin?

He was born on May 12, 1973, in Los Angeles, California, USA. His birth name is Mackenzie Alexander Astin and he is currently 47 years old.

He holds American citizenship and he is of English, Scottish, Irish, and German descent.

Mackenzie Astin debuted his acting career from the TV movie ‘Lois Gibbs and the Love Canal’ at the age of 9. He got more recognized from the television role Andy Moffett in the four seasons of the sitcom ‘The Facts of Life’ from 1985 to 1988. After that, he made his guest appearances on ‘House’, ‘Psych’, Grey’s Anatomy’, ‘NCIS’, etc.

Astin debuted his film career from the role of Dodger in the film ‘The Garbage Pail Kids Movie’ in 1987. Later, he made his appearance as Will Stoneman in ‘Iron Will’ in 1994, Teddy Horton in ‘The Evening Star’ in 1996. He lost the top edge of his right ear in a car accident during the filming of ‘The Evening Star’.

Astin worked with his father who is the Director of the Program in Theatre Arts and Studies at Johns Hopkins University in Baltimore, Maryland. They both collaborated from 2005 to 2010.

He won Camie award for ‘Love’s Enduring Promise’ in 2005, won OFTA Television Award in the category best Guest Actor in a Drama Series for ‘Lost’ in 2005, and won Young Artist Award for Best Young Supporting Actor in a Television Series for ‘The Facts of Life’ in 1986.

Also, she was nominated for Maverick Movie Award in the category Best Ensemble Acting: Feature for ‘Moments of Clarity’ in 2015.

The actor has accumulated a huge sum of money from his professional career. He has around $5 million of total assets.

The actor has not been involved in any type of rumors and controversies in his career to date. he has maintained his celebrity status without harming anyone.

Mackenzie Astin has light red hair and green eyes. Other information regarding his height, weight, etc. is unknown.

To know more about Allison Williams, Olivia Thirlby, and Sarah Sokolovic, please click on the link.