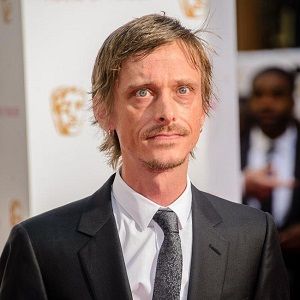 I still draw a lot though. Ballpoint pen is my preferred medium.

I like the outdoors and the natural world. Environmental issues.

Even with the darkest and most distressing subjects in movies there's always going to be humor not far away, just under the surface. And it does help otherwise we'd just get ourselves into a massive trough of depression if there wasn't humor just around the corner.

It's not a very secure industry. I've spoken to a couple of people recently who had a successful TV show and then found themselves absolutely skint and struggling to find a job.

Mackenzie Crook has been married to Lindsay Crook. They exchanged vows in Sep 2001.

Who is Mackenzie Crook?

Mackenzie Crook is one of the popular actor, director, comedian, and writer. He is famous for playing different roles in various hits movies.

Likewise, he is also more popular for appearing in TV series like- The Office, Pirates of the Caribbean films, and BBC four’s Detectorists and Game of Thrones.

The actor also has a sister, Zoe Crook.

Crook had a problem in his childhood and was put on a course of hormone therapy. It was due to a growth hormone deficiency and but was cured later on. In his childhood, he used to spend the time staying with his uncle at a tobacco farm.

It was the summertime and he uses to roam there on the farm which also developed his love for painting. Crook has also once worked at Pizza Hut at his young age.

Mackenzie completed his school from Wilmington Grammar School. Other information about his education is unknown.

Mackenzie Crook has gained this fame from his amazing performances in movies and TV series. Crook has appeared in several theatre plays and music videos.

Crook start his career by appearing in a Hollywood career in 1996.  That short film was The Man who Fell in Love with a Traffic Cone. Two years later, he appeared in his first TV series, The Eleven O’Clock Show. From his appearance, he also was nominated for British Comedy Awards.  After the series, he rose to fame and grabbed much of the fan following.

It was one of the most popular movies and was able to gain him a lot of fame. There he shares the scene with various famous actors like  Johny Depp, Keira Knightley, Orlando Bloom, Geoffery Rush, and Jack Davenport among others.

In 2013, he was featured in HBO’s hit series, Game Of Thrones. There he worked out with Emilia Clarke, Kit Harington, Sophie Turner, Lena Headey, Maisie Williams, Peter Dinklage, and Gwendoline Christie among others. After that the following year, he performs in a series, Detectorists. He won BAFTA Television Craft Awards and BAFTA Television Awards for his amazing performance in that TV series.

Talking about his latest work in movies and acting field in his performance in 2018’s series, Britannia where he shared the screen with Kelly Reilly, Liana Cornell, Eleanor Worthington-Cox and Stanley Weber among others.

Crook also ha appear in different theatre debuts. In 2004 working out with London West End production, he appears in One Flew Over the Cuckoo’s Nest opposite Christian Slater. And again after two years of that, he appears in The Exonerated at the Riverside Studios in Hammersmith.

Crook also starred in Ian Rickson’s The Seagull. His performance was so good that it earns him a nomination from the Evening Standard Theater Awards. Then no sooner in 2009, he appears in Jez Butterworth’s Jerusalem at the Royal Court Theater.

Crook has not only built his career in the acting field. moreover, he also involves in direction. He has directed a music video for the Paw Paw, London electro band. Likewise, he also has appeared as a postman in one of the music video titled, Dance Tonight. It was Paul McCartney’s album with Natalie Portman, an actress.

The director also has signed a deal with Faber. They together work out to publish and write a children’s book. Moreover, he has also written several books. His book includes Ragetti’s SecretDiary in 2009, The Windvale Sprites in 2011, and The Lost Journals of Benjamin Tooth in 2013.

In 2015, he receives Best Scripted Comedy Award for Detectorists in BAFTA Awards. Likewise, He also falls under the different nominations of Best Comedy Newcomer, Best Newcomer, Outstanding Performance by an Ensemble in a Drama Series respectively in 2001, 2004, and 2014.

Mackenzie Crook: Salary and Net Worth

As he is one of the renowned personalities now, he must have good earning. His net worth is $4 million. Most of the movie has a good collection at the box office.

Currently, he resides in Muswell Hill, London with his wife and children.

He must be going well in his both personal and professional life. So he has not been in any controversy and rumors.

The comedian stands with a height of 5 feet 9 inches and weighs. He has blond colored hair and blue colored eyes.

Mackenzie Crook is active on different social media and keeps on updating them with her latest work and photos. He isn’t active on Instagram. The actor is seen active on Twitter and has 12.2K followers.