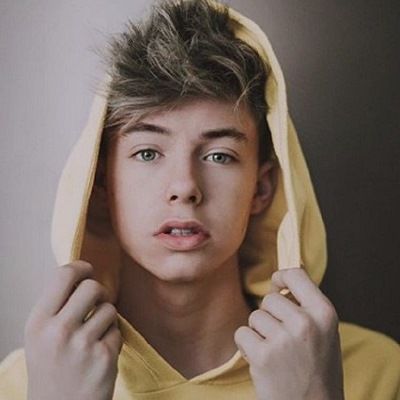 Mackenzie Sol is in a relationship with fellow dancer and social media star, Kendall Vertes since 2018.

They both appeared in his music video “Taken”, in which she played his love interest.

Who is Mackenzie Sol?

Mackenzie Sol is a British singer and songwriter. He signed to the Hana Road Music Group, an independent music company, and has released singles like ‘Never Letting You Go’, ‘My Gift’, and ‘Laugh’.

He was singing since he was a toddler which earned him accolades when he auditioned for ‘The X Factor. His portrayal of the title role Billy Elliot in West End’s Youth Theatre was significant.

He is also popular on his self-titled YouTube channel, where he posts his own songs.

He was born Mackenzie Sol Williamson on September 4, 2000, in Sunderland, England. As of 2021, he is 21 years old. He is a Virgo. He was born to his father George Williamson and his mother Nicki Brown.

Likewise, his father used to play in a music band back in the days and his mother is a former singer. Mackenzie holds British citizenship, but his ethnicity is English.

Sol studied Theatre and Arts at Stagecoach Theatre Arts College. From an early age, he was interested in acting and singing.

Mackenzie Sol appeared for an audition at the show, ‘The X Factor. Although he did not go too far in the show it served as a launching platform for his career. Since then, he has never looked back.

When he was 13, he shared the stage with Jennifer Hudson, Josh Groban, Kenneth “Babyface” Edmonds, and other stars in 2014 at the Carousel of Hope Ball in Los Angeles.

David Foster directed the musical night, and Mackenzie started off the event with the national anthem. He was highly praised for his performance.

In the following year, he signed with a record industry veterans’ group which has worked with renowned singers like Michael Jackson and Justin Timberlake.

In the year 2015, he released his debut single, ‘Never Letting You Go’, and later his first EP ‘My Gift’. He contributed to every aspect of the recording of these songs—from production to mixing.

Next, he released the song, ‘My Name’ along with a video that featured television actress Kalani Hilliker. The video became a super hit, and garnered over 6 million views on YouTube, and received 340k streams on Spotify. Recently, he released his single, ‘Taken’ in 2018.

Being a famous singer and a songwriter at a young age, Sol has bagged an impressive amount of money. His net worth is around $500 thousand.

Unlike other celebrities, there are no controversies or rumors about his professional as well as personal life.

Mackenzie Sol has light brown hair and green eyes. He has a height of 5 feet 9 inches and he weighs is 65Kg.