Updated On November 25, 2022 | Published By: pritishma pradhanang
Share this
Single 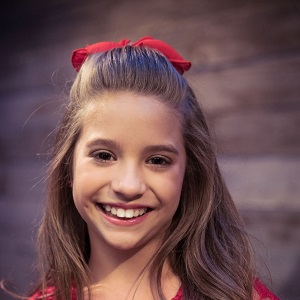 “Losing is not a good feeling, but I don’t ever lose anyway.”

“I’m lucky. I have nine crowns now, and they don’t really fit on my shelf. So, I’m gonna ask my mom to build another shelf.”

“Dance is my number one priority but I’m also doing a lot of acting and singing. I definitely want to be a triple threat.”

What is the relationship of Mackenzie Ziegler?

The young and talented American Musical.ly Star and Social media personality, Mackenzie Ziegler is currently an unmarried personality as she is of a very young age to marry a guy and set a family.

She is believed to be away from any sorts of relationships at the present time.

Talking about the past relationships of Mackenzie Ziegler, it is believed that there is no information about her past love affairs of her in which she was actively involved.

Thus, the social media personality, Mackenzie Ziegler is currently not dating anyone and is making love with her profession as well at the present time.

However, rumors are that she is having an affair with Hayden Summerall.

Who is Mackenzie Ziegler?

Mackenzie Ziegler is an American dancer, singer, actress, and model. She has also appeared on other television programs Nicky, Ricky, Dicky & Dawn.

What are the birth facts of Mackenzie Ziegler?

Mackenzie Ziegler was born on 4th June 2004 in Pittsburgh, Pennsylvania, United States. She is the daughter of Melissa Ziegler-Gibson and Kurt Ziegler but had got a divorce.

Her nationality is American and her ethnicity is mixed(Polish, German, and Italian).

Then her mother remarried again in 2013. She also has an older sister, Maddie, who is also a dancer and actress, as well as two older paternal half-brothers, Ryan and Tyler, and two older step-siblings, Matthew and Michelle.

She had started to dance at the Abby Lee Dance Company in Pittsburgh at the age of two where she had titles in dance competitions.

As she is young her life hasn’t begun yet so there is no record of her life.

Mackenzie Ziegler started her first career in dancing in 2011. She had first appeared on  Lifetime’s reality dance show Dance Moms, alongside her mother and sister.

In 2017, she and her sister conducted a dance workshop tour of Australia. She also kept her footsteps in the acting industry in 2015. Her first film was  Nicky, Ricky, Dicky & Dawn, and appeared in a WowWee commercial alongside her sister.

In 2014 she released her debut album Mack Z, which she also uses as a stage name for singing appearances. The music video for the album’s lead single, “Girl Party”, also reached 1 on the iTunes pop chart.

In 2016, she released her first single under her full name, a duet with singer Johnny Orlando, titled “Day & Night”. She also released another single, “Monsters (AKA Haters)” in 2017.

In 2015 she also walked the Polo Ralph Lauren Runway in New York City.  In 2016, she and her sister Maddie were the faces of Clean & Clear’s fall back-to-school campaign. She is talented and is too young but she has earned many fan followers.

Her Instagram account has more than 7 million followers,  her two YouTube channels have received a total of more than 100 million views with more than one million subscribers on her main channel.

In 2016,  Ziegler and her sister opened an organization that enables people to send homemade cards to orphan children. Her sister was chosen from the list of charitable young celebrities in 2016.

Unlike other celebrities, there is no information about the love life of Mackenzie Ziegler and her professional life as well.

Mackenzie has a height of 5 feet 2 inches.

Her body weighs 46kg. She has dark brown hair and brown eyes.