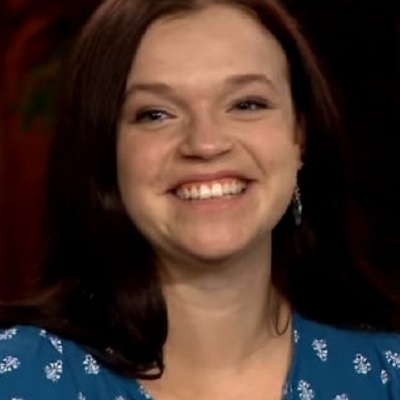 Maddie Brush is happily married to Caleb Brush. Her husband, Caleb is a mine equipment repairer from Worland, Wyoming.

The couple first met in the family marriage function. In 2015, Caleb purposed her for marriage with her father’s permission. On the 13th of September 2015, they ended up getting engaged.

Following that, they walked down the aisle on the 4th of June 2016. The wedding took place in Bozeman, Montana. At the wedding, she had five bridesmaids including her three sisters, Mariah, Aspyn, and Mykelti. Also, she has her sister, Truely as her flower girl. Also, the groom, Caleb was accompanied by four groomsmen.

Soon after that, the couple completed their family with their first son, Axel James on the 20th of May 2017.

later, on the 20th of August 2019, they brought a sister for Axel with the name, Evangalynn Kodi. However, their daughter suffers from a rare genetic syndrome. Due to that, bones in her extremities didn’t develop fully.

Who is Maddie Brush?

American Maddie Brush is a TV Personality. She is famous as the daughter of Kody and Janelle of Sister Wives & My 4 Wives.

She was born Madison Rose on the 3rd of November 1995 in Lehi, Utah, United States. Her father, Kody Brown and mother Janelle Brown are the TV personality. She is of British-Irish-Scottish ethnicity.

She has five siblings that include a sister, Savanah and four brothers, Logan, Hunter, Garrison, and Gabriel. Apart from that, she has 12 step-siblings.

Her family is famous for the TV series, Sister Wives & My 4 Wives. Her father, Kody is famous for his polygamy and has four wives, Meri, Janelle, Christine, and Robyn.

Brush’s parents Kody and Janelle Brown were married on the 17th of January 1993 spiritually. However, Janelle happens to be the second wife of her father.

Prior to that, his father was married to Meri Caroline Brown. Also, Christine and Robyn happen to the other wife that Kody married after Janelle. As of now, her father is married to Robyn only legally.

In 2010, Maddie Brush made her first appearance in the reality TV series, Sister Wives along with her family. The series was based on the lifestyle of her family who is having polygamy as their lifestyle. Soon after that, her fame rose with the series.

After, marriage with Caleb Brush, she joined her stepmother, Meri in her clothing business. However, in between, she had a sour relationship with her. Later, she started her clothing line business on her own.

She has an estimated net worth of $200k. Before marriage, her family earnings as a TV personality were 10% of the total budget of TLC’s total budget for the series, Sister Wives & My 4 Wives.

Apart from that, her husband, Caleb Brush has earnings as the mine equipment repair is in the range of $276k.

Once, through her Twitter, she called her stepmother, Meri a monster. Also, she mentioned that Meri is an abusive human and she is having freedom from her. At the time, she was working with Meri in the LuLaRoe clothing sales.

After that, she started working alone. In the matter, both of them never utter anything in the media.

Maddie Brush is a brown-eyed brunette. Information about her height and weight is still unknown yet.

Maddie is active on Instagram with the handle, madison_rose11. On this account, she has over 270k followers.

She is following the personalities like Jeannette Ogden, Liz Feldman, and Jase Robertson.