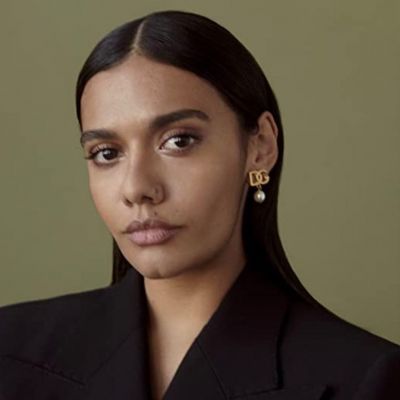 Who is Madeleine Madden Dating?

Reflecting on her romantic life, Currently, Madeleine Madden is dating Jack Rule. Looking at her 2018 back picture, the couple is assumed to be dating since 2018.

Who has she dated?

Besides Jack, there is not any guy with whom her name is linked as a romantic partner.

Who is Madeleine Madden?

Madeleine Madden is a known Australian actor. She is well known for portraying the role of Egwene al Vere in the 2021 American series, ‘The Wheel of Time.’

Her upcoming animated fantasy series, ‘Ark: The Animated Series is set to premiere in 2022.

The Australian actor was born on January 29, 1997, in Australia. As of 2022, she is 25 years old holding an Australian nationality. She belongs to mixed ethnicity and has the Aquarius star sign.

She was born to her father, Lee Maden, and mother, Hetti Perkins, art curator and writer. Born into a political family, her great-grandfather was Arrernte while her grandfather was Charles Perkins, an activist and soccer player.

Moving toward her siblings, She has two older sisters and half-sisters including, Miah Madden. Unfortunately, in 2003, her father passed away in a car accident.

As per her academics, she graduated from Rose Bay Secondary College.

Heading towards her social media appearance, Madeleine Madden is present on Instagram under the username, @madeleine_madden having more than 73.3K followers.

Likewise, her Twitter account has garnered around 18.9Kf followers. Adding up more, there is a Facebook page with her name, which is enriched with over 3.9K followers.

At the age of 13, Madden delivered a two-minute speech on the topic of, the Future of Indigenous Australians. In Australia, it was broadcasted to 6 million viewers on the television network named, every free-to-air.

In 2009, she appeared in the Australian drama series, My Place. Then, she went on to star in other Redfern Now, The Moodys, Jack Irish: Dead Point, and The Code.

In 2015, she was cast in the Australian teen-oriented drama series, Ready for This.

Similarly, she was cast as Egwene al’Vere in the American fantasy series, The Wheel of Time. Her upcoming animated fantasy series, ‘Ark: The Animated Series is set to premiere in 2022.

She shared the screen with Christina Ricci and Jack Thompson in Deborah Mailman’s 2013 short film, Around the Black.

In 2019, she was cast as young Dora in the American adventure comedy film, ‘Dora and the lost city of Gold.‘

What is the net worth of Madeleine Madden?

According to the sources, Madden has a net worth of about $1.5 Million. The actress’s salary and income are not disclosed yet.

The Australian actress has not been part of any serious rumors and controversies. She has well maintained her professional as well as personal life.

What are the body features of Madeleine Madden?

The versatile actress has a well-maintained body. Madeleine Madden is 5 feet 6 inches tall weighing around 55 Kg. Reflecting on her body measurements they are 32 inches bust, 24 inches waist, and 34 inches hips.

Her facial appearance includes a brown complexion along with a pair of black eyes and hair of the same color as well.