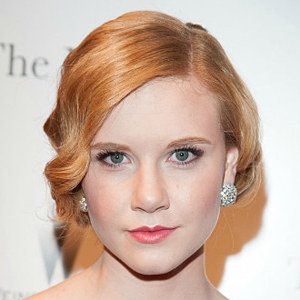 “People will tell you that you can't do it, no matter what you are trying to do, so you just have to really keep at it.”

Madisen Beaty is still living her single life. She has not been linked with anyone. There is no such information regarding her past affair and relationship also. She might be focusing on her career and searching for the perfect one that fits in her life.

Who is Madisen Beaty?

Madisen Beaty is an American actress who is recognized for her role as Daisy Fuller in the movie ‘The Curious Case of Benjamin Button’ in 2008. She is also popular for her character Doris Solstad in the film ‘The Master’ in 2012.

She was born on February 28, 1995, in Centennial, Colorado, US. She is currently 24 years old. Her nick name is Maddy. She has kept information regarding her parents, siblings, and childhood away from the media.

Madisen holds American citizenship but her ethnicity is unknown.

Talking about her education history, she has not provided any information about her college and university name.

She debuted her feature film form the drama film ‘The Curious Case of Benjamin Button’ in 2008 in which she portrayed the role of Daisy Fuller. Her recognized film roles include as Doris Solstad in the movie ‘The Master’ in 2012, Frances Wilkinson in ‘Jamie Marks Is Dead’ in 2014, Charlotte Tildon in ‘Outlaws and Angels’ in 2016, Kassi in ‘The Clovehitch Killer’ in 2018 and she will be portraying the role of Katie in the film ‘Once Upon a Time in Hollywood’ in 2019.

Madisen appeared in the Lifetime movie ‘The Pregnancy Pact’ in 2010 as Sara Dougan alongside Thora Birch. Later, she made her guest appearance in the iCarly episode ‘iWas a Pageant Girl’ and in the NCIS episode ‘Dead Air’ as Kristin Haskell. She portrayed the role of Patricia Krenwinkel as a series regular role for the second season of NBC’s period drama series ‘Aquarius’.

She has an estimated net worth of around $1 million and she has earned that sum of money from her acting career.