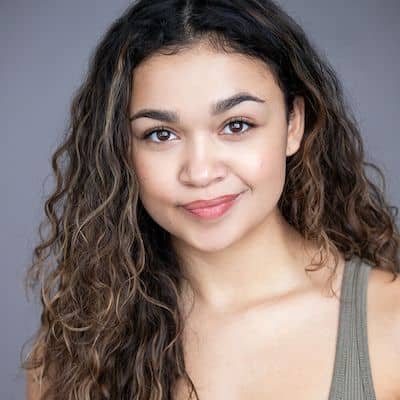 What is the relationship of Madison Bailey?

Madison Bailey is currently in a relationship. She is dating Charlotte Women’s Basketball player Mariah Linney.

She introduced her partner via her TikTok video captioning Surprise in June 2020.

They often post their lovely couple’s pictures on social media. On 19 April 2021, Madison uploaded a picture with her girlfriend in front of a mirror where she was giving a cheek kissLinney.

Previously, Madison dated JJ Hawkins but the details are unknown.

The revelation of being a pansexual was made by Mariah through her popular TikTok account. She posted a video about what pansexual really means in May 2020.

Who is Madison Bailey?

Madison Bailey is an American actress. The public noticed her for appearing in Outer Banks (2020), Black Lightning (2017), Creepshow (2019), and more.

Her TV movie Constance has been completed and she will be seen playing the role of Sasha. In 2020’s movie, Impractical Jokers: The Movie, she had a brief appearance as a girl.

She was born on 29 Jan 1999 in North Carolina, USA. The name of her biological mother and her father name is unknown.

But she was adopted by Alex and Mary Katherine Bailey. Madison’s ancestry is All-Italian and has three brothers plus three sisters. One of her sisters’ names is Katie Bailey.

As per her academics, she went to the East Forsyth High School.

Madison Bailey started her career by appearing in an episode of Constantine as Caroline in 2015. She is famed for appearing in Black Lightning as Wendy Hernandez and Outer Banks as Kiara.

She appeared in other acting projects. Some of them are,

As of 2021, her estimated net worth is around $500k US. However, her salary and other earnings are unknown.

Being popular on social media, she promoted some brands like Bubble, FashionNova, Fendi, JustFab, Free People, and more. Some of the top actress’s financial worth are,

This Outer Banks actress is keeping herself away from rumors and is also not surrounded by any desperate scandals.

Regarding Madison Bailey’s body features, her height is 5 ft 8 inches and her body weight is 53 kg.

Moreover, her eyes are dark brown and her hair color is also dark brown. She has a medium skin complexion.