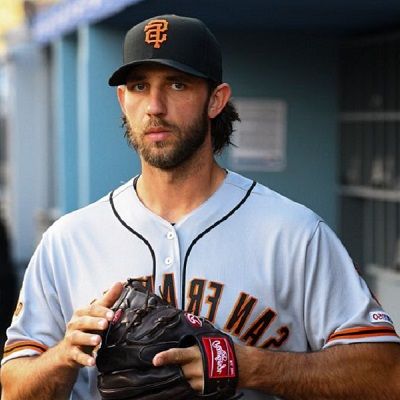 hey want to let everybody be themselves. Let me by myself -- that's me, you know?

I'd just as soon fight than walk or whatever. You just do your thing, I'll do mine. Everybody is different. I can't speak for everybody else, but that's just how I want to play. And that's how I'm going to.

What is the relationship of Madison Bumgarner?

He married his high-school sweetheart Ali Saunders on February 14, 2010. As per reports, the couple met in school in North Carolina. The pair instantly connected and decided to stay in a relationship that later turned into marriage.

Madison and Ali exchanged vows on Valentine’s Day of 2010. It was a small ceremony with the presence of some close friends and family. Later, jokingly, he also bought a cow for his wife as a gift. Regardless, the pair have been together for almost a decade now and are living very happily together.

Who is Madison Bumgarner?

Madison Bumgarner, famously known as ‘MadBum’ is an American professional baseball pitcher. He came to fame playing as a pitcher for one of the biggest teams, the San Francisco Giants of the MLB.

Madison is also popular as the Most Valuable Player(MVP) of his team. Furthermore, he is also a three-time World Series with the Giants.

Madison was born on August 1, 1989, in Hickory, North Carolina, the U.S. He was born to his father, Kevin Bumgarner, and mother, Debbie Bumgarner. However, his parents divorced when he was in high school.

Madison has a stepsister and two older half-brothers. Unfortunately, his stepsister, Dena died in 2010.

In which school did Madison Bumgarner attend?

Madison Bumgarner started off his baseball career at the very early age of four. Later, he joined the American Legion Baseball team. In 2007, he was picked the tenth overall in the MLB Draft to play for the San Francisco Giants. Furthermore, at that time, he was also ranked as the 14th best prospect overall.

After that, Madison pitched for the Augusta Greenjackets in the year 2008. However, his stint there lasted for a short time.

In 2009, San Francisco Giants called upon his first major league start. Madison made four appearances with the Giants in 2009. Moreover, he posted an ERA of 1.80 striking out ten batters and pitching ten innings.

In 2010, Madison became a part of the Giants’ first World Series championship in fifty-six years—since the 1954 World Series. It was also their first title in the fifty-two-year history of the San Francisco Era.

More heroics followed in 2011 as Bumgarner played a major role in the Giants’ season. 2012 was another successful year in MadBum’s career. The Giants won their second championship in three years.

Moreover, Madison won sixteen games with a 3.37 ERA and struck out one hundred and ninety-one batters in ​208 1⁄3 innings.

His WHIP was the lowest for the team’s left-hander since Carl Hubbell’s in 1933.

Since then, it has only been uphill for MadBum breaking records, setting new ones, and continuing as one of the best pitchers in the game.

Madison is a three-time World Series Champion. Similarly, he has also received World Series MVP as well as the Babe Ruth Awards. He is also a two-time Silver Slugger Award winner and a four-time MLB All-Star.

How much is the net worth of Madison Bumgarner?

There are rumors that MLB outfits Yankees and Astros have added Madison to their trade wishlist for the coming season. There are no real controversies surrounding Bumgarner.

Madison Bumgarner is a tall man with a height of around 6 feet 5 inches and weighs around 113 kg. He has green eyes and brown hair.

You may also like to read the career, bio, net worth, body measurements, etc of Albert Pujols, Matt Franco, Javier Lopez.