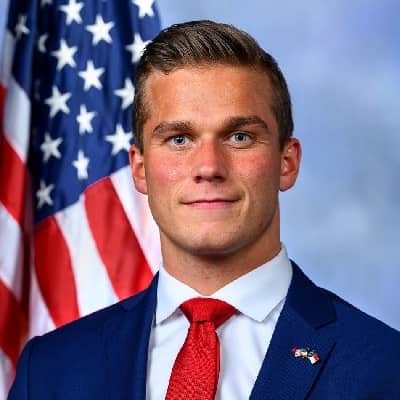 Madison Cawthorn has not married yet but he is engaged to Cristina Bayardelle. She is a college student and competitive CrossFit athlete.

Besides, she is also an American fitness model, athlete, fitness instructor. The lovebird got engaged in December 2019.

On October 13, 2020, Madison officially announced that they were going to exchange their vows in 2021 on the anniversary of his accident.

Who is Madison Cawthorn?

Madison Cawthorn is an American Politician who is the youngest member of Congress.

He is the Republican 2020North Carolina congressional candidate.

The politician was born on August 1, 1995. The birthplace of Madison is in Asheville, North Carolina.

He is of American citizenship and belongs of Caucasian descent. His birth name is David Madison Cawthorn.

Madison is the youngest son of Roger Cawthorn and Priscilla Cawthorn. He has an older brother named Zachary. His father is the senior supervision for the Saints association in the year 2013.

Moving towards her academic background, he was home-schooled in Hendersonville, North Carolina. He nominated by U.S. Representative Mark Meadows to the United States Naval Academy.

Later, he joined Patrick Henry College to studied political science. However, he dropped out after his first semester.

Similarly, he endorsed by former President Donald Trump and also endorsed by the vice-chairman of the House Republican conference, Mark Walker.

In August 2020, During Caawthorn’s campaign Katrina Krulikas and three other women made allegations of sexual misconduct and sexual assault against Madison including forcible touching and kissing.

On October 17, 2020, a group of alumni of the Patrick Henry college released a public letter with 10 signatories accusing him of sexually aggressive behavior.

In 2014, He was a passenger in an SUV driven by his friend named Bradley Ledford when his friend fell asleep at the wheel and Madison suffered a serious car accident, that caused him partially paralyzed and has been in a wheelchair since then.

He accused of $3 million in medical debt during his recovery. Similarly, his friend his friend’s insurance company offered him $3 million to cover his medical treatment whereas he sued the company for $30 million.

But the judge later ruled in the insurer’s favor.

Madison has earned a descent of wealth as a politician and entrepreneur. However, he hasn’t yet disclosed his salary and net worth.

The politician has an athletic body type who stands at the height of  5 feet 7 inches tall and his weight is around 75 kg.

Likewise, he has a dark brown hair color with a stunning blue color pair of eyes.

Furthermore, he is active on Facebook where he has over 106k followers and more than 98k likes.