Internet star-dancer Madison Haschak is low-key about her love affair. 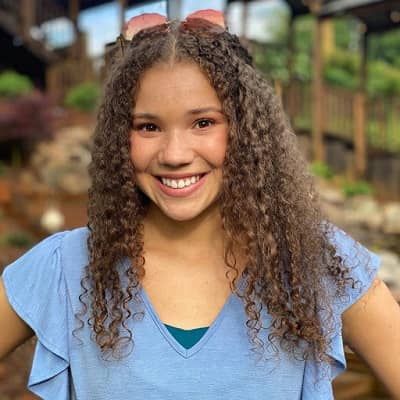 Madison hasn’t disclosed any information about her relationship and love affairs. Hence, she is single at the moment.

Yet there is various information spread that she is in a relationship with a boy named Jonathan. However, there is no official announcement made. The duo is seen spending their time together and so their dating rumors are spread.

Who is Madison Haschak?

Madison is an American dancer who was featured with her sister Gracie in the MattyBRaps music video for “My Humps.”

She rose to fame after her involvement as a dancer with the video game Just Dance 2. The star is represented by MattyB, LLC.

Madison was born on June 27, 2000, in California, USA. Her full name is Madison Daisy Haschak. She is of English ethnic groups.

She has three siblings sisters: Olivia Haschak, Sierra Haschak, and Gracie Haschak. The four sisters are part of a popular singing group called the Haschak Sisters.

Madison was interested in dancing from a young age and started dancing when she was just two yrs old. Similarly, she had her first dance solo at age seven.

She finished her education at the University of Georgia Athletics College.

Madison started dancing from the young age of two. Similarly, she was trained at the Temecula Dance Company along with her sisters.

And Madison came into the limelight after she started uploading various dancing videos. Further, she was also featured with her sister Gracie Haschak in the MattyBRaps music video, ‘My Humps.’

Afterward, she was a dancer in the video game ‘Just Dance 2.’ Similarly, she has even performed on stage renditions of ‘The Nutcracker’ and ‘The Perfect Gift.’

Her career as a dancer uplifter after she performs with Sophia Lucia at the MDA Show of Strength. She has also won various dance competitions like the junior solo in San Diego, the extreme junior solo at the Primetime Dance Competition.

In addition, she became the runner-up in 2008 overall primary 8 and under the solo. Further, she was able to win the 2012 overall junior American League Solo, 2013 teen American League Solo and also the 2014 teen extreme solo in the Prime Time Dance Competition.

Madison released her first single, Daddy Says No, in March 2016 via MattyB, LLC. The group has also released various other songs afterward.

They upload various challenges, behind the scene, carpool karaoke, and much more content video on the channel.

The sister posts their first video, “Haschak Sisters – Sister Tag” which was posted on July 18, 2015, seven after they created their channel.   The video has garnered almost 10M views as of now.

“Haschak Sisters – Like A Girl” is their most popular video which has garnered 287M views at the moment. Following her popularity on youtube, she has garnered good attention from social media.

Similarly, the Haschak Sisters, which has more than 6,510,767 endorsers, has the month to month salary running between $28.5K – $455.8K that makes $341.8K-$5.5M in a year. And they also earn from their merch where they sell various clothing through Spreadshirt.

Madison has an average height of 5 ft 6½ in (169 cm) and weighs around 60 kg (132 lbs). Similarly, she has dark curly brunette hair with beautiful dark brown eyes.

Madison is active on Instagram with over 497K followers and over 5K followers on her Facebook page.