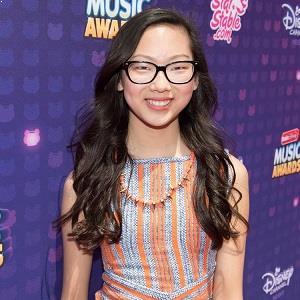 Madison Hu is unmarried till now. She has kept her personal life private and out of the spotlight. She usually doesn’t talk about her private life in the media and public.

Who is Madison Hu?

Madison Hu is an American actress. She is best known for the portrayal of Frankie on the Disney Channel series Bizaardvark (2016-2019).

She was born on 2 June 2002, in Longview, Texas, US. Her ethnicity is Asian as her parents are from China.

There is no information about her father and mother. But she has an older brother.

Her educational background is unknown. She usually doesn’t talk about her private life in the media and public. She prefers people focusing on her work rather than her personal life.

Madison Hu began her acting career in 2011. She first appeared on TV in 2011, in an episode of the American reality TV show called I Kid with Brad Garrett. After that, she appeared as Ling Quan in the 2013 movie Bad Words.

She then had a role as Debbie in an episode of the hit TV series The Goldbergs in 2014. She also appeared in the series Tosh.0 as Katie in 2014.

Madison was also seen in an American sitcom, Best Friends Whenever as Marci. She portrayed the role from 2015 to 2016. In 2015, she was featured in other series like Grace and Frankie and The Kicks.

Since 2016, she portrays the lead character Frankie Wong on the Disney Channel sitcom Bizaardvark.

This actor’s estimated net worth is $500 thousand. Her 2013 movie Bad Words has collected around $7.8 million at the box office.

Madison is 5 ft 9 inches tall. Her weight is 57 kg and her body measurements are 31-24-34 inches. Her eye color and hair color are black.