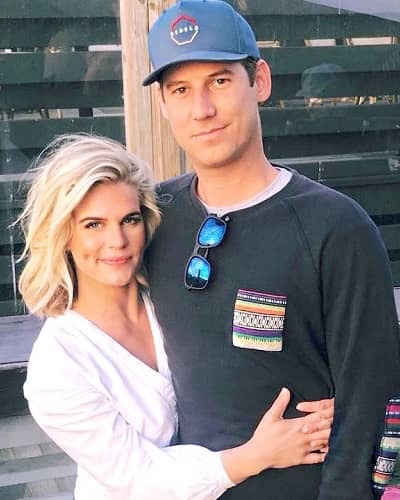 Madison LeCroy is a Salon Owner at Blush & Brushes. She is a professional freelance makeup artist and hairstylist based in Charleston, South Carolina. She was the hair and makeup artist of Elysium Salon.

Likewise, she was a cosmetologist/makeup artist for Stella Nova Spa Salon. LeCroy is specialized in balayage and haircutting with a background in hair and makeup for print, web, television/film, and weddings.

What is the age of Madison LeCroy?

Madison LeCroy was born on 6th October 1990 in Greenville, South Carolina. She is 30 years old at present. She is the daughter of Tara LeCroy and Ted LeCroy.

Likewise, Madison was raised in Greenville along with her brother and sister. She went to Carolina College of Hair Design in the year 2007 and studied Cosmetology.

Madison LeCroy and Austin Kroll had an up and down relationship over the years. They would often break and come back to each other.

In an episode of the Bravo series which aired in December 2020, she decided to end the relationship for good after nearly 3 years together.

She revealed that this time it had hit her breaking point after watching Kroll ignore social distancing guidelines during the pandemic.

“I just feel like he never took it seriously. For me, that was just selfish. I thought that if we were going to be in this tight-knit relationship, we should have gone through [quarantine] together. Instead, he continued to party. his has really closed the door for me. I need to move on, I need to get over him and I think the only way to do that is to see what else is out there.”

She and Austen Kroll are continuing to clash even though they have split. Madison gave her former boyfriend a call to uninvite him from her upcoming trip to Capers Island. It was a celebration that was previously intended to be for Austen’s birthday before the two broke up.

Also read Chris Hughes, the ex-boyfriend of Jesy Nelson goes on a wild partying on hearing about her new love, Sean Sagar!

Does Madison have children?

Madison LeCroy has a son with ex-husband Josh Hughes. Her son Hudson is 7 years old at present. Her son was close to Austin. She said,

“I think he’s helped me maybe two times go pick up Hudson from school in that span. I have a problem with asking people for help and this is my responsibility and so I’m not looking at Austen for that. But, you know, he’d come over and have dinner with us and things like that.”

Austin Kroll, whose nickname is Austin, is an American actor. He is recognized for his role in ‘Southern Charm Season 4’. His appearance in the fourth season swept away all the limelight and the audience’s curiosity about his lifestyle. Read more bio…

Fessy Shafaat on his relationship with Haleigh Broucher! How did Fessy and Haleigh meet?
Tags : reality TV star Sourthern Charm