Madison LeCroy’s relationship status at present is taken. She is with her fiancee Brett Randle with whom she exchanged rings.

They engaged in Oct 2021 after being dating him since April of the same year. Brett proposed to her in the living room which was perfect for a proposal for her.

Madison in the past was married to Josh Hughes in 2010 when she was only 20 years of age. But after five years, the wedding was called off. During this time, she gave birth to their son named Hudson.

She appeared in Southern Charm by being the lover of Austen Kroll. They dated from 2018 and in Dec 2020, the news of their broke up was published.

Madison had a brief romance with Jay Cutler in Jan 2021 and Alex Rodriguez in the same year. 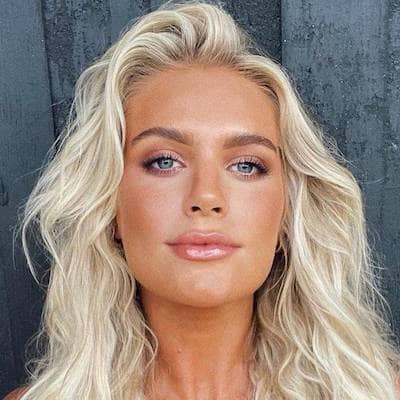 Who is Madison LeCroy?

Madison LeCroy is an American TV personality as well as a model. Madison LeCroy gained fame after becoming the star cast of the show Southern Charm.

She is also an Instagram star who has thousand of followers.

Her birthdate is 06 Oct 1990 and she was born in Greenville, South Carolina, the United States. The name of her mother and her father’s identity is not revealed.

Further, Madison LeCroy’s ancestry is Caucasian, and as per her academics, she attended Carolina College-Hair Design.

Madison LeCroy is a model and was seen in a reality TV show. She started by appearing in Southern Charm in its 7th and 8th seasons.

She was first appeared as a guest in the 2nd plus 3rd seasons.

This is an American reality TV series that was first aired on 03 March 2014 that tells us about the personal and professional lives of socialites. They all lives in the are of Charleston, South Carolina.

Created by Bryan Kestner and Whitney Sudler-Smith, Southern Charm has as of now 8 seasons with 83 episodes. Along with Madison, the oter casts are John Pringle, Olivia Flowers, Venita Aspen, Chleb Ravenell, and Marcie Hobbs.

By the reports of 2022, she has an estimated net worth of $1 million. But her annual salary and other earnings are not yet mentioned.

This cast of Southern Charm is keeping herself away from scandals along with desperate rumors.

Madison LeCroy’s height is 5 ft 4 inches and her body weight is average. Moreover, she has blonde hair and has beautiful eyes in blue color.

On 07 March 2022, she posted pictures with her gang that were loved by the fans.