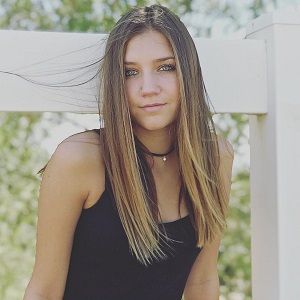 The 15-year-old American YouTuber, Madison is in a relationship with Caden Conrique. Recently in 2018, the couple confirmed their relationship and are still dating. Furthermore, Caden has also made a video named “I got her a ring!!!!!” on his YouTube channel.

Moreover, the lovebirds have been sharing various photos of them on their Instagram account. Apart from him, she was also in a relationship with Marco in 2015 and broke up shortly. Soon after that, she was also linked up with singer Carson Lueders. Currently, Caden and Madison are enjoying their love life and living elegantly.

Who is Madison Lewis?

Madison Lewis is an American musical.ly star as well as an Instagram star. Currently, she has more than 427k followers on Instagram and over 154k subscribers on her YouTube channel. Furthermore, she also plays as Birdie on the famous web series Chicken Girls.

Madison was born on December 24, 2002, in Arizona, United States of America. Talking about her nationality, she is American and her ethnicity is unknown. She is a triplet with her sister Riley Lewis and brother Dakota Lewis.

As a teenager, she has a total focus on her career. Concerning her education, currently, she is pursuing her study as a high school student.

Madison began her career with the musical.ly app. Since then, she has been posting various videos on the app. She posted an original sound by Kian Lawley for her first musical.ly video. Back in 2016, she posted a song, “Wannabe” by Spice Girls. Currently, she has amassed over 2.5 million fans following on her musical.ly app. Furthermore, she also plays as Birdie on the famous web series Chicken Girls along with Annie LeBlanc and Hayden Summerall.

Besides this, she is also a YouTuber on which she has gained over 154k subscribers on her YouTube channel. Some of her most viewed videos are Chapstick Challenge, Try Not To Challenge, Making Crunchy Smile, and Attempt to make Butter Slime FAIL. In addition, she is also an Instagram star with more than 427k followers.

Being a famous musical.ly star, she earns a decent amount of money from her profession. However, her salary and net worth are unknown.

So far, Madison has not won any awards in her career. Although, she has been doing her job in the best possible way and her works have been also loved by many people around the world.

As of now, there are no rumors regarding her personal and professional life. Furthermore, she has never faced any controversy in her career to date. It seems she has total focus on her work rather than stuck in any controversy.

Madison has a height of 5 ft 4 inches and her weight is unknown. Moreover, she has a pair of beautiful blue eyes and light brown hair. Apart from that, there is not any information regarding her other body measurements.