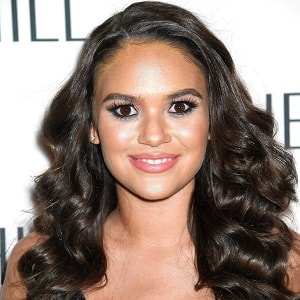 “I just like being on stage and making people happy”.

What is the relationship of Madison Pettis?

Madison Pettis started dating famous American TV actor Bryce Cass when she was young but broke up due to personal differences.

Then she started dating Jaden Smith but that relationship also did not last long after a public spat. Recently, it is being heard that she is dating Garrett Back storm but they have not confessed yet.

Who is Madison Pettis?

Madison Pettis is an American model, actress, and voice actress. She has been best recognized for her performance in the Disney Show, Cory in the House as Sophie Martinez.

She was born on July 22, 1998, in Arlington, Texas. Her birth sign is Cancer. His father’s name is Steven Pettis and his mother’s name is Michelle Pettis.

Her mother is of Italian, French, and Irish descent whereas his father is African American. She has a younger brother named Steven Pettis.

She has had lot of interest in modeling and acting since childhood. Her family supported her and encouraged her to start a successful career in media history.

There is no information about her education and it is still under review. But she started her career in her early childhood.

She started her career interestingly. She was initially noticed in a local magazine ‘FortWorthChild’ when she was photographed along with her mother. Media companies were impressed with her personality and contacted her with offers.

She continued her acting in ‘Seven Pounds’ as Lorena and in 2011, she did two main roles the voice role of Izzy on the series ‘Jake and the Never Land Pirates and Allie Brookes on the Canadian television series ‘Life with Boys’.

She performed a recurring role in ‘Disney XD’ series ‘Lab Rats’ in 2012 and she cast a voice role on the Disney Channel in a series named ‘The Lion Guard’ in 2015.

If you want to know about the birth facts, family, childhood, education, profession, net worth, awards, relations, etc. of Drena De Niro, Alex Lange, and Gary Oldman, then click on the given link.

She has been several times nominated in her profession. She was a nominee for Young Artist Award in the years 2008 and 2009 for Outstanding Young Performers in a TV Series for ‘Cory in the House and for Best Performance in a Feature film –Young Actress for ‘The Game Plan.

Madison Pettis: Salary and Net Worth

Exact net worth is quite difficult to calculate but it is estimated that she has a net worth of around $500,000 as of 2022, and she has a huge salary that adds to her net worth. However, it is still under review.

She was rumored to have an affair with an actor, Cameron Boyce, in 2013 but it was proved wrong. Other rumors and controversies are not available as she likes to keep her things personal.

She is famous in Social Media as well she has around 3.7m followers on Instagram, above 1.5M followers on Twitter and more than 6.96 million followers on Facebook.