Madison Prewett gained fame after becoming the runner-up of The Bachelor season 24.

She has not shared the details of her current affair or her boyfriend’s details.

But in the year 2020, she had a short date with Connor Saeli. In the same year, she was seen romancing Peter Weber in The Bachelor‘s season 24.

They parted their ways after the finale of the show. 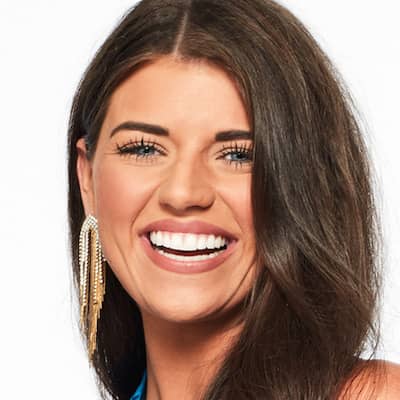 Always stand up for what you believe in

Who is Madison Prewett?

She participated in the 2014’s Miss Alabama Teen USA pageant and won the crown. As an author, she wrote a book titled “Made For This Moment” that was printed on October 19, 2021.

Her birthdate is 25 March 1996 and she was born in Auburn, Alabama, the United States as Madison Rose Prewett. The name of her mother is Tonya Prewett and her father’s identity is Chad Prewett.

Further, Madison’s ancestry is Caucasian and has two sisters named Mary Prewett plus Mallory Prewett.  As per her academics, she attended Auburn University and passed out with a bachelor of science degree in 2018.

From here she completed her studies in mass communications and media studies. Similarly, she went to Highlands College to study scripture.

Madison Prewett is a model and was seen in several reality TV shows. She started by appearing in The Bachelor (2020) as a contestant. This season was aired in Jan 2020 and the bachelor was a pilot named Peter Weber.

The other girls who competed for the heart of Peter were Alayah Benavidez, Victoria Paul, Kelsey Weier, Maurissa Gunn, etc. The season was won by Hannah Ann Sluss and Madison became the runner-up.

But Peter left Hannah as he said he was still in love with Madison. The show’s host caught her before her flight to Los Angeles. But they called off their relationship after three days of the final episode on March 13, 2020.

By the review of 2022, she has an estimated net worth of $300 thousand. But her annual salary and other earnings are not yet announced.

When she participated in the game show The Price Is Right in 2019, she won a prize amount of $8,000. In addition, she has promoted brands such as NYS Eyewear, My Saint My Hero, Painted Pink, and Brooklinen.

This cast of The Bachelor Season 24 is keeping herself away from scandals along with desperate rumors.

Madison Prewett’s height is 5 ft 5 inches and her body weight is 52 kg. Moreover, she has dark brown hair and eyes in blue color.

She has a charming appearance and has pierced her ears.