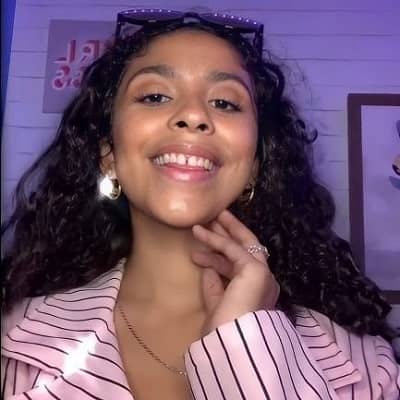 Madison Reyes is single as of now.

Though there are many rumors of her being in a relationship with co-star Charlie Gillespie, they both have confirmed that they are single. Madison and Charlie’s characters also like each other on the show and the two are really close friends in real life. Madison has not revealed anything regarding her previous boyfriends and relationships.

Who is Madison Reyes?

Madison Reyes is a popular American actress and singer. She is also a popular personality on social media with a huge following.

She is best known for her portrayal of Julie Molina in the TV series Julie and the Phantoms.

Madison Reyes was born on the 25th of June, 2004 in Brooklyn, New York, U.S.A. As of now, her age is 16. Her nationality is American and her ethnicity is Latino as her parents are originally from Puerto Rico.

Madison was born to mother Maggie Reyes and father Ricardo Reyes. Her mother is a female Army Reserve for the U.S. Army and her father works as an entrepreneur. She was raised in the U.S. along with her younger sister. She is also really close with her family and frequently uploads pictures of her family on social media.

Talking about her education, Madison attended Arts Academy Charter Middle School. After that, she attended the Lehigh Charter High School of the Arts. But she only attended the high school for one year, after which she began homeschooling while auditioning for Julie and the Phantoms.

Madison started her career in acting through the musical TV series Julie and the Phantoms. She plays the lead role of Julie Molina in the series which was a hard-earned role. Many fans might not know this but Madison had to beat over 700 contestants in order to secure the lead role in the series. All of this was worth it in the end as the series is well made and is very popular. Madison also gained valuable experience with this role as she worked alongside stars like Sacha Carlson, Charlie Gillespie, Jadah Marie, Jeremy Shada, and many more.

Madison and her co-star Charlie Gillespie also wrote and sang the song Perfect Harmony which was featured in Julie and the Phantoms. She has a great voice and her lyricism is also really good. As such several of her other songs such as Bright and Wake Up were also featured in the series and fans loved all her songs.

As of now, Madison Reyes has an estimated net worth of roughly 500k U.S. dollars. Madison earned most of this through her role in Julie and the Phantoms. She has not revealed her annual salary as of now.

Madison has not been a part of any negative controversies or rumors as of now. She is very focused on her career and has gathered a loving fanbase.

Reyes stands at a height of 5 feet 4 inches tall and her weight is roughly 54 kilograms. She is blessed with good looks and has a balanced physique. Her eyes and hair are both black in color.

After the release of Julie and the Phantoms, Madison gained massive popularity. Thanks to this, she now has over 493k followers on Tiktok and over a million followers on Instagram.

Also, get to know more about celebrities Charlie Gillespie and Jadah Marie.