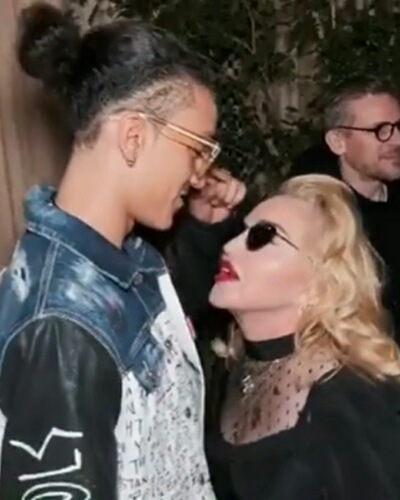 Update 2022: Madonna and Ahlamalik are no longer a romantic couple. The two ended their three-year relationship in April 2022. Madonna is presently rumored to be dating a model Andrew Darnell after the two were reported to be getting cozy.

The famed singer Madonna, 63 is dating Ahlamalik Williams who is 26 now and therefore 37 years younger than her. It was his birthday recently and Madonna put up a special loving tribute on her Instagram for him.

On Friday, 24 April 2020, Madonna put up a special Instagram post. She uploaded some rare never-before-seen photos of the couple on her social media.

“I could not think of a better person to be in Quarantine with! ♉️ @ahla_malik.”

She is in self-isolation with Ahlamalik and her children.

Madonna also uploaded a photo drawn by her fan of the two cuddling together in their drawing-room. In another photo, she was wearing all black and planting a kiss on his lips as he held an empty champagne glass in his hand.

In a third photo, Madonna hugged him sweetly burying her head into his chest. And there was another photo in which they were sitting together at a table on a hookah date night.

Before the special birthday post, the singer had shared with her fans a video in which her twin daughters Stelle and Estere, both 9 were making birthday cards for her beau.

The songstress and Ahlamalik first met in 2015. He is a backup dancer and had auditioned for her Rebel Heart tour.

In September 2019, they were photographed together on a date after one of her shows. His pictures with Madonna’s kids surfaced and he was on family vacations with them.

In December 2019, Ahlamalik’s father confirmed to TMZ that the relationship between his son and Madonna is serious and she has already met his family.

He has no issues with it and said:

“Love has no age. My son is livin’ la vida loca, and I’m just happy for him.”

Madonna and her past relationships

She has dated multiple men over the years. In 1980, she had a relationship with American screenwriter Dan Gilroy for a few months. She wed Sean Penn in 1985 and after four years came to their divorce.

Michigan-born Madonna is a singer and a songwriter. Additionally, she is also an actress and a businesswoman. Madonna is an American national. Grammy award-winning singer is popular for her songs like “Take a Bow”, “4 minutes”, “Like a Virgin”, “Like a Prayer”, and so on.

Presently, she is a prominent name in the music industry as a legendary figure in the pop genre. Furthermore, she is also well-known as the “The Queen of Pop”, and “The Material Girl”. More info…

Source: The Things, Wikipedia,  The Blast

7 Sexiest couples on Netflix! Who are they dating in real life?
Tags : Actress Musician Singer Songwriter