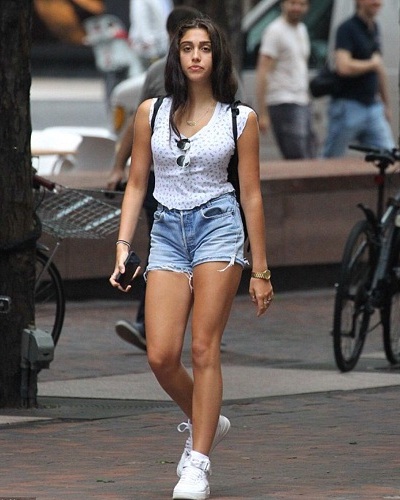 Lourdes Leon and her nearly-naked attire

Lourdes Leon who is the daughter of Madonna was out to attend a party yesterday night. It was her dress which caught the attention of the media and made headlines. She had worn a very racy outfit and she was nearly nude in it.

It was made of delicate sheer gossamer fabric which she wrapped around her slender frame and it had a see-through white bodice base.

The brunette beauty who is now 25 was not concerned and she was confidently flashing her nipples in the exposing attire. She posed for the red carpet in this dress and it was for the Vogue Fashion Fund Event in Brooklyn in New York.

The dress was also short and her slender legs and thighs were also visible. The dress had thin straps and was close to her curves. She wore white-heeled sandals and statement earrings. She clutched onto a snakeskin bag and she ascertained that her dress catches the attention of one and all. Additionally, she pulled back her hair into a ponytail and she had smokey eye make-up. She kept her arm tattoos visible for all.

About Madonna’s praise for her daughter Lourdes

Lourdes Leon is a stunning model and her parents are Madonna, 63, and Carlos Leon, 55. Lourdes had her birthday last month and on the occasion, her mother had uploaded several pictures of Lourdes on her Instagram. In one of the pictures, the pair were embracing each other and smiling for the camera.

“Happy Birthday to my darling Lolita! Light of my Life! Me Preciosa! #littlestar.”

In the other, the two were next to each other and it was a selfie-and Madonna wrote for this:

“You’ll never know how much I love you.”

She had also uploaded a picture of the little Lourdes. She wrote for this:

“Never forget you who are little star. Our daughters are the future!”

Lourdes made her debut on the ramp at the New York Fashion Week this year and she has also appeared in campaigns for Stella McCartney and Converse.

Lourdes has not yet completed her studies. She is at the University of Michigan and can speak French and Spanish. Lourdes is one of the six children of Madonna. She has a half-brother called Rocco Ritchie who is 18.

Besides these, Madonna has also officially adopted four children from Malawi who are named David, Mercy, and twins Stella and Ether.

Also read Famed singer Madonna’s struggles with OCD and insomnia! What has her gay brother Christopher to say about his sister’s insomnia?

Lourdes is now all set to follow in her mother’s footsteps and has made her appearance in 2019’s Miu Miu fashion campaign. She was featured with other talented models such as Zazie Beetz and Maya Hawke. The beautiful fashionistas were captured by David Sims, a photographer.

Lourdes Leon is an American model, fashion designer, and singer and she is best known for her work on ‘Madonna: Celebration-The Video Collection’ in 2009 and for appearing on the TV series ‘106 & park Top 10 Live’. More bio…