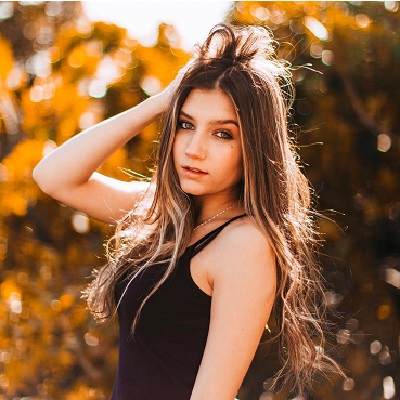 Before that, she was in a relationship with the TikTok star, Jaden Hossler. The former couple started dating each other back in 2019. However, they had a hard time in their relationship and broke up with each other in 2020.

Prior to that, she has also dated the Instagram star, Charles Gitnick in July 2018. They parted their way in September 2019.

Who is Mads Lewis?

American Mads Lewis is a Social Media Star and actress. She is renowned for her Instagram post and TikTok video that went viral on the web.

Last, in 2020, she appeared in the TV series, Chicken Girls as Birdie.

Mads Lewis was born as Madison Lewis on the 24th of December 2002 in Arizona, United States. Her father works in the construction business whereas her mother is a fashion designer. They are of Scottish-French-British ethnicity.

She shares her birth date with her two siblings that include a sister, Riley Lewis, and brother, Dakota Lewis. As of now, she has not shared any educational details.

Mads Lewis started her journey as a social media star through her TikTok video in 2018. In her TikTok account, she uploads dancing videos and duet videos. Prior to that, she was also active on musically too.

Within no time, she gathered huge fans and followers on the apps. As of now, on the platform, she has around 7.8 million followers with over 475.5 million likes.

At present, she has more than 3.2 million followers on Instagram.

Moving forwards, she started posting moments of her life through Instagram where she portraying herself as a cheerful personality.

She also has a self-titled YouTube channel with 475k subscribers and was created on the 22nd of May 2014. However, she started uploading videos in 2015.

In the channel, she used to uploads challenge videos including Whisper Challenge, Couples Challenge, Baby Food challenge, and some other cool stuff.

Last, she uploaded makeup challenge video which is also one of the highest viewed videos on her channel.

The talented social media star is also an actress. She started her acting career back in 2017 with the comedy based movie, Alexander IRL. She did a minor role in the movie, Lady Maybelline.

The same year, she appeared in the TV series, Chicken Girls as Birdie which also happens to be the most accomplished role in her acting career. Moving forward, she also appeared Chicken Girls: The Movie too.

Besides that, her earnings through her per video in TikTok are in the range of $4.7k to $7.8 with an engagement rate of 2.72%. Apart from that, she also makes through her Instagram posts too that ranges in 5 digits figures.

As of now, she has managed to remain far from any sort of controversy that created a buzz in the media.

However, there are rumors that she is dating the TikTok star, Garrison Hatley. Till the date, she has not confirmed the rumors yet.

Mads Lewis is a blue-eyed brunette. Her height is 5 feet 6 inches and weighs around 56 kg.

On Twitter, she is following the personalities including David Dobrik, Kylie Jenner, and Teala Dunn.