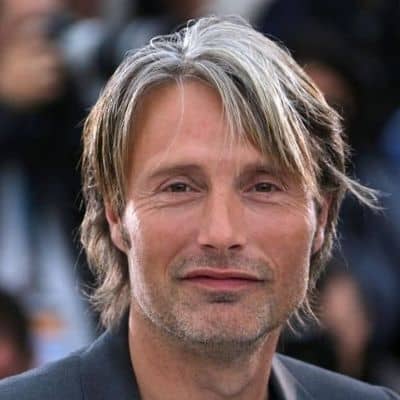 Talking about his relationship details, Mads Mikkelsen is a married man. He is happily living married life with his longtime partner, Hanne Jacobsen. His wife, Jacobsen is a dance choreographer by profession. The couple met for the first time during a dance competition and started dating in 1987.

Moreover, the lovebirds walked through the aisle on 2 December 2000. They are blessed with two children, a daughter, Viola Jacobson Mikkelson, and a son, Carl Jacobsen Mikkelson.

Mads lives happily with his family in a mansion on the Spanish island of Mallorca. Also, he lives in Toronto while filming Hannibal.

Who is Mads Mikkelsen?

Mads Mikkelsen is a well-recognized Danish actor. Mikkelsen is widely famed for his roles in films like the Pusher film trilogy, Rejseholdet, Open Hearts, The Green Butchers, Adam’s Apples.

Mads Mikkelsen was born on 22 November 1965. At present, his age is 55 years old. Likewise, his birthplace is Cophenhagen, Denmark.

Mads is the son of his father, Henning Mikkelsen whereas his mother is Bente Christiansen. Moreover, he has a brother named Lars Mikkelsen.

Talking about his nationality, Douglas holds a Danes identity whereas his ethnicity is Danish.

Regarding education, the star studied dancing at the Balettakademien in Gothenburg. He also studied drama at the Arhus Theatre School in 1996 and entered into an acting career.

Mads made his acting debut in 1996 in the role of a drug dealer in Nicholas Winding Refn’s internationally successful film, Pusher. He then featured in the leading role of Lenny in Refn’s Bleeder in 1999. In 2000, the star portrayed the role of gangster against Soren Pilmark, Ulrich Thomsen, and Nikolaj Lie Kaas in Flickering Lights.

Moreover, Mikkelsen performed in the award-winning film, Prag in 2006 where he worked alongside Stine Stengade and Jana Plodkova. In the same year, the star performed the lead role in the Danish drama, After the wedding which led him to win an Academy Award nomination for Best Foreign.

Freshly, the star signed with Warner Bros. for the character of Gellert Grindelwald in the Fantastic Beasts series. Later, in April 2021, Mads became a member of Indiana Jones 5.

A famed personality, Mikkelson has earned a handsome amount of money from his profession. He has been active in his profession from the year 1996 till the present.

It is reported that Mads Mikkelsen has an estimated net worth of $14 million.

Mads has never been part of any controversial matter or rumors till now.

55 years old star, Mads has handsome looks and an admirable personality. He stands at a height of 6feet. Also, he has a balanced body weight of 80 kg.

Furthermore, Douglas has hazel eyes whereas his hair is grey. His body measurement is 40-32-16 inches(chest-waist-biceps) respectively.

Regarding his social media presence, Mads Mikkelsen is an active personality on social media. Mads has more than 1.2 million followers on his official Instagram account @theofficialmads.

He is also active on Twitter with around 223.5k followers.

Moreover, Douglas is also available on Facebook with nearly 885k fans and supporters.