Popular Canadian writer, comedian, and actor. They are popular for their writing skills in the series Feel Good, Baroness Von Sketch Show, and more.

Mae Martin is bisexual and at present is possibly single. As per the reports of March 202o, he said that he is not dating anyone.

However, in the past, they have dated both men and women.

But he is a good friend of Elliot Page. Recently, they show the world their friendship by getting a matching tattoo of a coffee cup.

Out from the Closet

Mae in 2021 declared themself as non-binary and queer people. As for pronouns, they like to use they/them but also said it is ok to call them she/her. 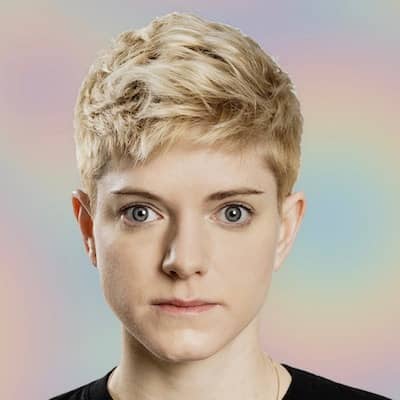 Who is Mae Martin?

Mae Martin is a popular Canadian writer, comedian, and actor. They are popular for their writing skills in the series Feel Good, Baroness Von Sketch Show, and more.

They are in a comedy group named The Young and the Useless where they won two Canadian Comedy Awards.

Their birthdate is 02 May 1987 and they were born in Toronto, Canada. The name of their mother is Wendy Martin and their father is James Chatto.

Their mom is a writer/teacher while their dad is a food writer.

Mae’s ancestry is Caucasian and has an older brother named Joseph. Regarding their academics, they went to an all-girls school.

Mae Martin is a popular face of the entertainment world. They wrote 6 episodes of TV series titled Feel Good in 2020.

As an actor, Mae was also featured in several screen projects. They played the role of Mae in Feel Good (TV Series). For this, BAFTA TV Award-nominated them for Best Female Comedy Performance.

Also, their portrayal in Uncle as Imogen and Outsiders as Min was appreciated by the viewers. They also appeared in a short film titled Upstaged (2012) as Mae and Bagatelle (2001) as Grace.

By the recorded reports of 2022, they have accumulated a net worth of around $5 million US. The salary from their acting journey is behind the curtain.

This writer/comedian is keeping himself away from rumors and desperate scandals. But in their former days, they were addicted to drugs for which they often visited rehabilitation centers.

They use this experience for their stand-up routines.

Mae Martin’s height is 5 ft 5 inches and their body weight is average. Similarly, they have light brown eyes and their hair is in blonde color.

They are also on Instagram with more than 430k supporters.