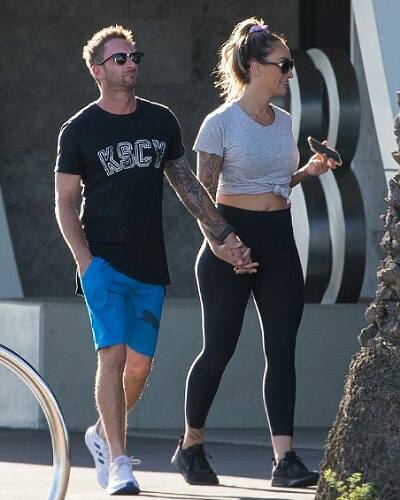 The reality TV star on the show Married At First Sight Hayley Vernon was spotted with a tattooed mystery man. Additionally, the two were holding hands while in Melbourne in Australia. Who is the mystery man in her life!?

Hayley Vernon and her new boyfriend?

The MAFS alum Hayley Vernon, 32 is probably in a relationship with a mystery man with tattoos. And the couple was spotted in Melbourne in Australia holding each other’s hands. It was on the bright and sunny afternoon of Monday 13 April 2020 and the new man is reportedly Scotty.

But Hayley said that she is not dating Scotty. The two are just friends and there is nothing romantic between them. They were having a wonderful stroll in South Melbourne. Additionally, the couple was walking side by side and appeared very much relaxed in each other’s company. At one point of time, they even wrapped their hands around each other.

More about the ‘friendly’ stroll of the couple

The couple, Hayley and Scotty, was laughing as they made jokes during the casual walk. Hayley was casually dressed in an activewear of a pair of black leggings and a cropped grey T-shirt. Furthermore, it highlighted her slender and beautiful physique.

Hayley insisted that Scotty has been one of my best friends for many years. She told Daily Mail UK:

‘Scotty has always been there for me, his family are an extension of mine. He came up [to visit me] to make sure I didn’t spend Easter alone,’

‘I can’t see my dad as he is self-isolating. Easter is significant to me as it’s the time in my life I decided to get clean.’

Hayley and her ice (crystal methamphetamine) addiction and relationships

Hayley was formerly addicted to ice or crystal methamphetamine. But she has been very open about it on the reality TV show. In order to overcome this dreadful addiction, Hayley took to fitness programs. Due to her addiction, she got estranged from her family and relatives. But after she came out of it, she was able to reconnect with them and again enjoy life as before.

On the show in its season 7, Hayley had married David Cannon. But after this show wedding, she went in a wild night out in Sydney and had kissed co-star Michael Goonan behind his back in a drunken state. This led to breakage of her marriage in two weeks.

And after the show, Hayley had a great transformation of her body. She dyed her hair blonde, had botox injections, took filler treatments, received a leg sleeve tattoo, and also got veneers. Additionally, on last Saturday she was at Next Dimension Hair & Co located in Melbourne where she completed part of her makeover by doing soft beach waves and extensions.

David on the other hand has regrets of going on the show. The horse trainer said:

‘It was a f**king soul-destroying experience,’

‘Anyone that decides to go on there, you’re a f**king idiot,’