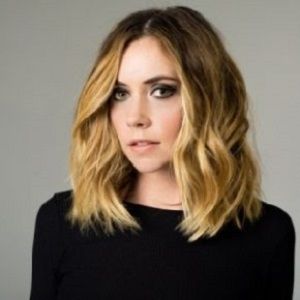 Talking more about her personal life, Maggie Eckford is a married woman. She is married to Jess Reed. The couple got married in December 2015. There is no any information about their dating history. Maggie and Reed have been married for over a year now and their relationship is going very well. There are no any other records of her past and present relationships.

Who is Maggie Eckford?

Maggie Eckford is an American electronic pop singer-songwriter. She is very popular by her stage name Ruelle. She is famous for providing the theme songs for the MTV series The Shannara Chronicles and the series Shadowhunters.

Eckford is the lead vocalist in the haunting electropop act group, Ruelle.

Maggie was born on November 21, 1985, in Starkville, Mississippi, USA. Her nationality is American but her ethnicity is unknown.

Maggie began her career as a singer at a young age. Her first two albums, For What It’s Worth (2010) and Show and Tell (2012), released under her birth name Maggie Eckford were indie pop. She then adopted the stage name Ruelle to represent a change in genre. She moved towards electronic pop with a dark and cinematic style.

Later, she released two hit EPs Up in Flames (2015) and Madness (2016). Her first television placement was a song in a Japanese iPad commercial. She also sang theme songs for the hit series Shadowhunters and The Shannara Chronicles.

Eckford’s songs are featured in numerous primetime television series. Her famous songs for TV induces Dancing with the Stars, Guilt, How to Get Away with Murder, The Leftovers, The Originals, Pretty Little Liars, and much more. She was previously placed second in the AAA category of the International Songwriting Competition.

Maggie Eckford: Salary and Net Worth

Maggie Eckford’s net worth and Salary are unknown.

Moving Towards her body measurements, she has blonde hair and her eyes are green. There is no information about her height, weight, shoe size, and dress size.