Maggie is in a relationship with a boy named Andy Bonner.

The couple posts various photos together on their social media accounts. There are no other details that when they started dating. They seem happy spending time together. 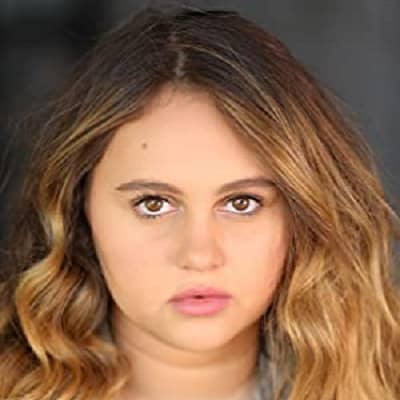 Who is Maggie Elizabeth Jones?

Maggie Elizabeth Jones is an American child actress. She is popular for portraying in We Bought a Zoo, the Fox sitcom Ben and Kate, and An American Girl: Lea to the Rescue.

Her parents are Jason Jones and Angela Jones. She has an elder sister named Mary-Charles Jones and a younger Lillian Ellen Jones.

By nationality, she is an American and is of English origin.

Maggie is studying at the Landmark Christian School. It is a private school in Fairburn, Georgia. Her graduation is expected to be in the year 2022.

Elizabeth stepped into the acting field debuting as Mia in the 2010 movie Most Likely to Succeed. The same year she also appeared in movies like The Party.

And in the year 2011,  she appeared in various movies like Test Subject B, Game Time: Tackling the Past, Footloose, and also in We Bought a Zoo. In Footloose she worked alongside her sister Mary-Charles Jones.

Similarly, Maggie played in films including The First Time (2012), Identity Thief (2013). In 2013 she was part of series regular on the FOX TV series Ben and Kate, opposite Dakota Johnson and Nat Faxon. And on the pilot episode of Halt and Catch Fire, she worked with her younger sister, Lillian Ellen Jones.

Maggie has also worked in a video game named King’s Quest – Chapter III: Once Upon A Climb as Gwendolyn in 2016. And likewise, her recent work was portraying the lead role of Lea Clark in the American Girl Doll Film, Lea to the Rescue in the spring of 2016.

Maggie has amassed a net worth of around $20 million.

She has appeared in various movies that were good at the commercial market. We Bought a Zoo was made under the budget of $50 million and earned $120.1 million commercially.

Furthermore, the actress also earns from her merchandise.

The actress has never been involved in any rumors in her life. She is more focused on building her career and also stays far from any such controversial activities.

The actress has reddish blonde hair with brown colored eyes.

She is also active on Tiktok and has amassed around 2.5K followers with over 33K likes.