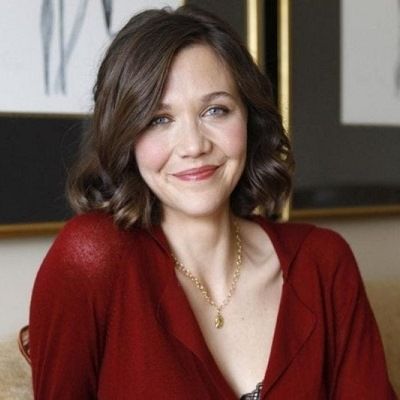 You're invited to tons of parties, and you'll wear these shoes and that dress, and it can be enticing, but I think it also sucks you dry. If you do it a little, sure, it's fun, but too much and you start to lose your footing.

"I've realized that the only way to make movies that you're proud of, that don't fall into the sentimental bullshit that so many movies fall into, is to fight. You have to fight. So many people are willing to sleepwalk through things and fall into the not human, not interesting choice".

"I think it's important to see. It's a real violation, and it forces people to get emotionally involved in something that's intellectual and political".

What is the relationship of Maggie Gyllenhaal?

Talking about her relationship, she tied the knot with Peter Sarsgaard on May 2, 2009. They are in a healthy relationship and there is no record of them being involved in any rumors nad controversy.

They made their relationship public in 2002.

They have two daughters, Ramona (b. 2006) and Gloria Ray Sarsgaard (b. 2012) and the family currently lives in Brooklyn, New York.

Who is Maggie Gyllenhaal?

Maggie Gyllenhaal is an American actress known for her minor but impactful performances in films.

She had the biggest role of her career as a lead in the film ‘The Dark Knight’.

She was nominated for the Oscars in 2009 for the Best Performance by an Actress in a Supporting Role.

father separated from her mother and remarried Kathleen Man.

She has a sibling who is an actor namely, Jake Gyllenhaal.

In which school did Maggie Gyllenhaal attend?

Talking about Maggie’s education history, she studied drama at Harvard–Westlake prep school. She completed her graduation in 1995 and studied literature and Eastern religions at Columbia University, New York.

Talking about her profession, Maggie Gyllenhaal made her debut in films at the age of fifteen in 1992 with ‘Waterland’ which was directed by her father.

Her next two films, ‘A Dangerous Woman’ (1993) and ‘Homegrown’ (1998) were also directed by her father and featured her brother as well.

She also appeared in the television movie ‘The Patron Saint of Liars’ in 1998.

In addition, she showed her range by appearing in the comedy movies Adaptation’ and ’40 Days and 40 Nights in 2002.

Whereas, she appeared in ‘Paris, jet’aime’, ‘World Trade Center’ and ‘Stranger than Fiction in 2006 and gave her voice for ‘Monster House’ the same year.

Maggie played the lead in the commercially successful film ‘The Dark Knight’ in 2008.

Similarly, she played the role of a bohemian college professor in ‘Away We Go’ in 2009 and acted in the play ‘Uncle Vanya’ in 2009.

Likewise, she appeared in the movies Nanny McPhee Returns’ (2010) and ‘Hysteria’ (2011), and also acted in the Classic Stage Company’s production ‘Three Sisters’ in 2011.

She hosted the documentary Discovery’s “Curiosity“’ in 2012 and appeared in the television movie ‘The Corrections’ in 2012.

She also appeared in a TV mini-series ‘The Honourable Woman’ in 2014.

Gyllenhaal’s narration performance of ‘Anna Karenina’ by Leo Tolstoy was made available for purchase in August 2016.
She played herself in one episode of ‘Inside Amy Schumer’ in 2016 and narrated the documentary ‘Truth and Power’ the same year.
She appeared in the TC show ‘The Deuce’.

She won Best Performance by an Actress in a Miniseries or Motion Picture Made for Television for The Honourable Woman (2014) at Golden Globe Award.

She has also won Best Cast Ensemble for The Dark Knight (2008) at Awards Circuit Community Awards, she also won Best Actress for Secretary (2002) at the Boston Society of Film Critics Awards.

How much is the net worth of Maggie Gyllenhaal?

She has an estimated net worth of around $25 million (as per 2021 data) and she has earned that sum of money from her professional career.

Maggie Gyllenhaal has a height of 5 feet 8 inches. Additionally, she weighs is 60Kg.

Maggie’s hair color is dark brown and her eye color is blue. Furthermore, her dress size is 6 (US) and her shoe size is 9.5 (US).

Being an American actress, Maggie has a huge fan following.