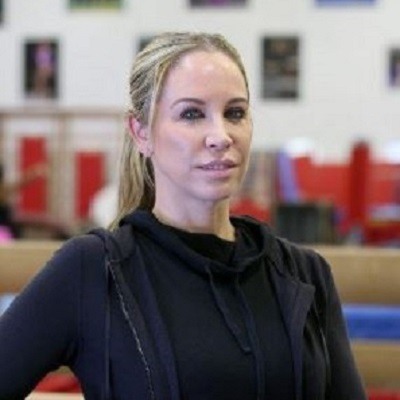 Maggie Haney is a married woman. Her husband, David Haney is also associated with the MG Elite. For the Gym, he creates and cuts music. The story behind their wedding is still a mystery.

Together, they are blessed with two children including a son, Ryker (born: 2016)and a daughter, Dayton (born 2012).

Who is Maggie Haney?

American Maggie Haney is a former gymnastics coach. She is renowned as the coach of 2016- Olympic Gold Medalist, Laurie Hernandez, and 2018- World Champion, Riley McCusker.

She is also the founder and the head coach of MG Elite Gymnastics, Inc.

Maggie Haney was born as Maggie Elaine Haney on the 8th of February 1978 in Garland, Texa, USA. She is of British-Scottish ethnicity.

As of now, she has not disclosed any details about her mother and father.

During her university days, she was a part of the University’s gymnastic team, NC State Wolfpack. At the time, she was the first gymnast in the college to score perfect 10s in the college’s history.

– Maggie Haney started gymnastics when she was three years old. Moving forward, she pursued her career as a gymnast.

– In 2007, she started coaching in New Jersey. After 5 years of a coaching career, she established her gym, MG Elite Gymnastics, Inc. From the gym, there is at least one gymnast in the national team roster from 2013 – 2020.

Through her career, she has an estimated net worth of $900k. Her earnings as a Gymnast coach are in the range of $28k to $48k.

Besides that, she also earns through her gym, MG Elite.

Maggie Haney has blue eyes with blonde hair. Her height is 5 feet 5 inches and weighs around 63 kg with a slim body physique.

The first complaint against Maggie Haney was received by USA Gymnastics officials back in 2016. However, the very first investigation against her was conducted in August 2019 for the verbal and emotional abuse allegations. During the investigation, more than half a dozen of the family filed complain against her.

Moving forwards, her student Laurie Hernandez testified verbally that, she had been verbally and emotionally abused by her. Also, she faced an eating disorder too. Later, Riley McCusker also testified against her in a written basis.