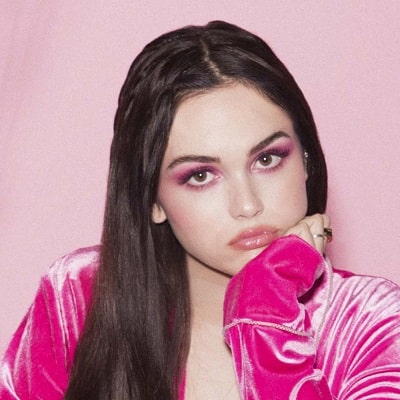 Maggie Lindemann is currently in a relationship. She is dating singer Brandon Arreaga since early 2019. It was first believed to be a rumor since they didn’t respond to much of the fans’ speculations, however, it was later confirmed Brandon himself when he wished Maggie, happy birthday on her 21st birthday.

Previously, she dated fellow social media star Carter Reynolds from 2014 to 2015. The relationship brought a lot of scandal of being cheating and Maggie been suicidal due to this relationship.

After that, she dated Mikey Barone in 2016 and they were seen being cozy in a Snapchat video. and YouTube personality Brennen Taylor in 2017 but their relationship also did not go well.

Who is  Maggie Lindemann?

Maggie Lindemann is an American singer and social media personality who is best recognized for her dance-oriented electronic pop.

In addition, she is known for her debut single, “Knocking On Your Heart” which earned her a Top 20 spot on the iTunes Alternative Chart within a day of its release. She came out as bisexual publicly in 2016.

She was born on the 21st of July 1998, in Dallas, Texas, United States of America. She was born to  Barton Duane Lindemann and his wife Susan Denise Denson. She has a brother but his name is unknown.

She joined J.J. Pearce High School in Richardson, Texas and then she moved to Los Angeles to pursue music

Initially, Maggie Lindemann used to post her singing talent on the social media app called Keek. She immediately earned huge fans on both the app and her social media accounts. Then she moved to Los Angeles to continue pursuing a musical career.

She released her first of many singles “Knocking On Your Heart” in September 2015., which made it to the Top 20 on the iTunes Alternative Chart within 24 hours of its release.

On Oct 30, 2015, Lindemann released her second single, Couple of Kids, and released her third single, ‘Things’ on Jan 29, 2016. Her third song broke the record ranking on the Top 50 on the Spotify Viral 50 worldwide and the top five of the Canada viral chart.

Moreover, in 2016, she released a new single called “Pretty Girl” which is still her the only charting single to date which peaked at number 26 on the Spotify Viral 50 chart and at number 5 on Next Big Sound chart. It also peaked at #8 on the UK Singles Chart.

She has an estimated net worth of around $200k and she has earned that sum of money from her professional career.

However, details about her salary are not disclosed.