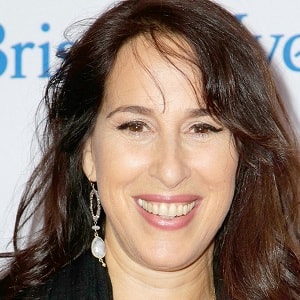 “People like to hear me say, 'You love me, Chandler Bing. You just don't know you love me.’”

Maggie Wheeler has been married to Daniel Borden Wheeler on 20 October 1990, and they have welcomed two daughters: Juno and Gemma. They have an age gap of 5 years. The couple is living a happy married life without any sign of divorce or an extra-marital affair.

Previously, she dated David Duchovny, an American actor, writer, producer, director, novelist, and singer-songwriter. Maggie and David started dating after first meeting while working in the 1989 film, New Year’s Day. However, the couple separated after some time of their affair.

Who is Maggie Wheeler?

Maggie Wheeler is an American actress and she is known for her role as Janice on the sitcom ‘Friends’ and her recurring character on ‘Everybody Loves Raymond’ as Linda. Maggie has won LA Femme Filmmaker for the category Comedic Actress in Television Award in 2010

She was born on August 7, 1961, in Manhatten, New York, USA. She was given a birth name as Margaret Emily Jakobson and she has a birth sign of Leo. Her father’s name is John Jakobson and her mother’s name is Barbara. Her father began his career on Wall Street and is the youngest member of the New York Stock Exchange and her mother is a Writer. Her family belongs to secular Jewish.

Maggie spent her childhood at a summer camp in Vermont and she developed her love towards music at that time. Later she became interested in gospel music, spirituals and the music of Africa. She holds American citizenship and her ethnicity is  Ashkenazi Jewish.

She was graduates of the Community Choir Leadership Training inVictoria, BC. Other information regarding her education history is under review.

Maggie debuted her voice acting career from the animated series ‘SilverHawks’ in the 1980s where she provided the voice of the villainess Melodia and the heroine ‘Steelheart/Emily Hart.

She was called for the audition for the role of Monica Geller but she was offered to play the role of Janice Garolnik and she made her appearance at least once in each season of ‘Friends’.

maggie gave the audition for the role of Debra Barone for the American sitcom ‘Everybody Loves Raymond’ but she was offered for another role of Debra’s friend, Linda by CBS.

She made her presence in the comedy show ‘Seinfeld’ in the episode ‘The Fix-Up’ and she acted in various television programs like  ‘Drake & Josh’, ‘ER’, ‘The X-Files’, ‘The War at Home’, ‘Will and Grace’, Jack and Jill’, etc.

Maggie gave the voice in ‘Batman: The Animated Series’ episode “Joker’s Millions” in 1997 and she made her appearance in the remake of Disney’s ‘TheParent Trap’ in 1998 where she portrayed the role of the younger of a mother-daughter pair of camp counselors.

She gave the voice of the character Odile in ‘Barbie of Swan Lake’ and also showed her voice talent of the character Trinette in four episodes of ‘Archer’ on FX. Maggie made a guest starred as Dina’s Mom in the Disney Channel Original series ‘Shake It Up’ in 2011.

Maggie Wheeler: Net Worth and Salary

It is estimated that she has a net worth of around $2 million and her main source of earning is from her acting and voice acting career.

There was a rumor of her death on Wednesday, 12 August and the reason was said to be a heart attack but it has now confirmed that she is not dead and the news was just a hoax.

She has a height of 5 ft. 5 inches and she weighs 54 kg. She has got dark brown colored hair and has dark brown eyes. Other information regarding her waist, breast, shoe size, dress size is unavailable and it is under review.